Test passenger train speeds will be gradually increased in preparation for public opening in 2023. 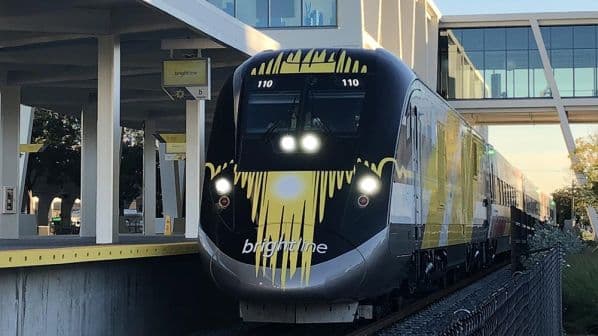 BRIGHTLINE, which has been working to extend its current operations over the 108km between Miami and West Palm Beach by 270km to Orlando International Airport, has announced it is carrying out testing at higher speeds on the section of the Florida East Coast Railway passing through northern Brevard County.

The announcement was made to warn local residents that the previously low-speed, single-track freight line would now see passenger trains travelling initially at 127km/h and then, in early 2023, at up to 177km/h as part of the testing process prior to public opening.

The warning also alerted people to the fact that trains could be travelling in both directions using a second track that has been laid as part of the route upgrade, so they should expect longer delays at level crossings. Brightline is posting personnel at every crossing as an additional precaution.

There are 18 level crossings on the 21km section from Sharpes through Cocoa and Rockledge. Testing will be carried out from 06.00 - 18.00 daily from October 29 until November 5.

The five contractors working on the project are the Hubbard Construction Company, Wharton-Smith, The Middlesex Corporation, Granite, and HSR Constructors.

When the first of Brightline’s five passenger trains, supplied by Siemens Mobility, arrived for testing at Orlando International Airport station in May, the company said its extension works were 80% complete and it expected to complete construction by the end of this year in time to begin operating services in early 2023. However, in August it announced that completion of building work had now been pushed back to early in 2023.

Preliminary work on the Orlando extension began in 2019 and while during the Covid-19 pandemic all Brightline services between Miami and West Palm Beach ceased for 15 months, and 250 staff were laid off, construction work on the Orlando extension continued. Since Brightline passenger services restarted in November 2021 ridership has recovered on the Miami - West Palm Beach route and is now 147% above 2019 levels.

When completed the Orlando extension will be equipped for passenger trains to operate at up to 200km/h.

Brightline has been working on finalising a route for a further extension from Orlando International Airport to Tampa on Florida’s west coast and also has a stake in property and regeneration along its route. Further initiatives include operating a taxi  and minibus shuttle service to enable passengers living within a certain radius of the line to “take the train and leave the car at home.”