Project aims to offer a journey time of to 2h 15min and reduce road traffic on Interstate 15. 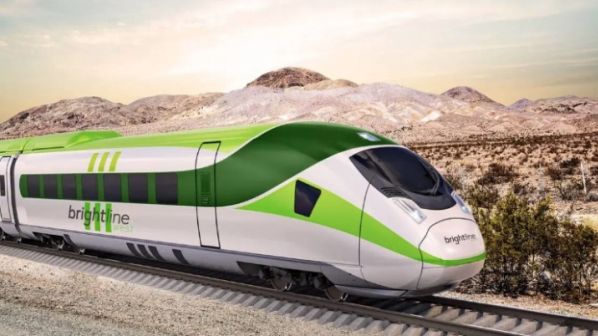 An artist's impression of how a Brightline West high-speed train will look once the Las Vegas - Los Angeles line is open.
Photo Credit: Brightlines

BRIGHTLINE West says that it is hoping to begin construction on the long-planned 418.5km Las Vegas, Nevada, to Southern California high-speed line next year.

The estimated $US 8bn project would connect Las Vegas to Los Angeles via a route running alongside the Insterstate 15 highway (I-15), mostly within the “meridian strip” central reservation, and would include three stations in the high desert and San Bernardino County areas. If work proceeds as planned, the line could open in 2026 or 2027.

Construction of the line between Las Vegas and Victoriaville has already been approved, and the Federal Railroad Administration (FRA) has released an environmental assessment report for the 79km stretch through the Cajon Pass between the Victor Valley and Rancho Cucamonga. The assessment concluded that the planned line would have no significantly adverse impacts on either the environment or low income or minority populations.

The FRA will continue to invite public comments on the proposals until November 28. Project permits are expected to be finalised by March 2023.

In April 2021 Brightline West’s CEO, Mr Mike Reininger, predicted that construction of the line would start “in a matter of weeks” - but in the event there were further delays to the project.

Brightline West expects to offer a journey time of approximately 2h 15min, operating at a top speed of 290km/h. This is more than twice as fast as the equivalent journey by road.

The company says that currently around 50 million one-way trips are made annually between Las Vegas and Los Angeles, 85% of them by car or bus, and the aim of the high-speed rail project is to attract approximately 12 million one-way trips per year. The use of zero-emission high-speed EMUs are predicted to remove an estimated 400,000 tons of CO2 annually by reducing traffic levels between Los Angeles and Las Vegas by 3 million vehicles.

“The elevated train experience residents and tourists have come to expect in South Florida will be offered along this route as well, including but not limited to: free onboard Wi-Fi, fully ADA accessibility from station to train, a wide selection of food and beverage, checked luggage and hotel check-in service,” Brightline says.

“Brightline represents the greenest form of transportation in the United States, with the potential to remove millions of cars every year from the I-15 and tremendous economic benefits for Nevada and Southern California,” says Brightline spokesman, Mr Ben Porritt. “The environmental assessment underscores the positive environmental impact of utilising the I-15 [corridor] for high-speed rail and is a significant step in the process to receive the key approval to begin construction.”

Funding for the rail project will comprise a mix of federal grants and private-activity bonds that Brightline would apply for in both Nevada and California. Brightline was previously approved to receive $US 200m of private-activity bonds in Nevada and $US 600m in California and official guidelines would allow the company to market those tax-exempt bonds for up to four times their amount, making a combined total of $US 3.2bn.

It has been estimated that building the line will create 40,000 construction jobs, the Las Vegas Review-Journal reports.

The station in Las Vegas is envisaged to be in a convenient location on the Vegas strip. The project plans call for a 6039m2 terminal to be constructed on a portion of a 44.5ha site owned by Fortress Investment Group, which owns Brightline through an affiliate. The Las Vegas Review-Journal reports that Fortress is in talks with Major League Soccer (MLS) to potentially construct an MLS stadium on another part of the same site.

Stations in California are to include Victorville, Hesperia and Rancho Cucamonga, where a connection would be made with Metrolink services to and from central Los Angeles. Also on the drawing board is a future planned connection from Victor Valley to the California High-Speed Rail at Palmdale.

“This will transform transportation in Southern California and Las Vegas for generations by providing a fast and efficient connection that gets people out of their cars, reduces traffic congestion and decreases air pollution,” says California state treasurer, Ms Fiona Ma.