BRITAIN’s infrastructure manager, Network Rail (NR) has started to remove sections of a 1960s viaduct at Bletchley for the East-West Rail project. 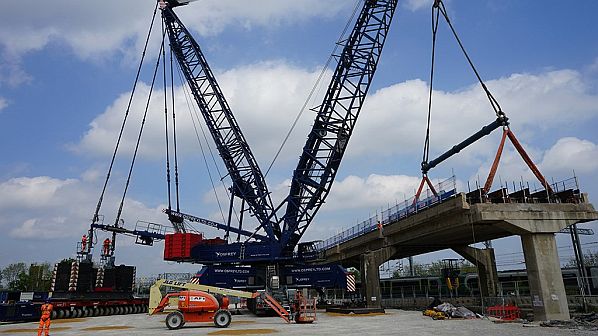 One of the spans of the flyover at Bletchley being removed for Britain's East West Rail project.

NR has started to dismantle 14 spans of the 37-span viaduct which crosses the West Coast Main Line (WCML) so that they can be rebuilt to modern standards. The WCML will need to close on three occasions in May so that eight of spans which cross the WCML can be removed.

The East-West Railway involves recreating the rail link between Oxford and Cambridge. The first phase entailing the rebuilding of the line from Oxford to Bicester was completed in December 2016. Phase two covers the sections from Bicester and Aylesbury to Bletchley and entails reopening a largely disused railway. This will allow two trains per hour to operate between Oxford and Milton Keynes (north of Bletchley on the WCML), and hourly services from Oxford to Bedford, and Aylesbury to Milton Keynes.

Phase three requires the construction of a new line from Bedford via an interchange with the East Coast Main Line to Cambridge. The alignment for the new line was chosen in January.

Major construction on phase two should have started towards the end of 2019. However, government approval for this was only granted in February. Some work, such vegitation clearance and removal of old track, is underway to facilitate the start of the main earthworks later this year. The Bletchley flyover work is being carried out under NR’s permitted development rights and local planning permission.