Testing of Switzerland’s Ceneri Base Tunnel set to begin

SWISS Federal Railways (SBB) is set to commission ETCS Level 2 in the Ceneri Base Tunnel on the night of February 29 ahead of the start of line testing by Alp Transit Gotthard, a wholly-owned subsidiary of SBB and the developer of the 15.4km tunnel, the following day. 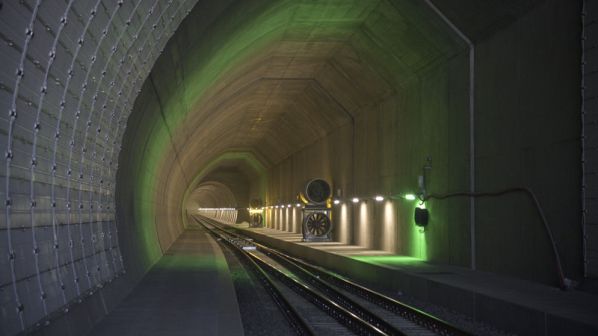 SBB will activate the Ceneri Base Tunnel’s ETCS control centres at Vigana in the north and Vezia in the south and begin the migration from lineside signalling to the ETCS Level 2 in-cab solution for the Taverne - Vezia - Lugano section of the Bellinzona - Lugano line.

Thales installed ETCS Level 2 under a €57m contract awarded in 2016 with the supplier also responsible for project management and integration of train command and control systems.

SBB has secured authorisation to activate ETCS Level 2 in the tunnel from Switzerland’s Federal Office of Transport (BAV). The railway has completed the main preparation work with final internal safety checks set to conclude by February 29. The commissioning process will involve 140 employees and take place in several stages. It includes updates to the Giubiasco electronic central unit and the section between Giubiasco and Cadenazzo.

The work will disrupt traffic on the north-south axis that night with all freight traffic on the Gotthard axis set to either be halted or diverted via the Lötschberg Base Tunnel. All lines will also be closed between Castione-Arbedo, Cadenazzo and Lugano, disrupting Tilo (Ticino - Lombardy) cross-border as well as regional passenger services with replacement buses set to be in operation.

Alp Transit Gotthard has also secured approval from BAV to activate the traction system to commence line testing, which will continue until the end of August 2020 at which point the tunnel will be handed over to SBB.

SBB says ETCS Level 2 will support the operation of four freight trains and six passenger trains through the tunnel per hour when it opens for traffic on December 12-13.

Construction on the tunnel began in 2006 and is the final section of the Zürich - Milan corridor upgrade project, which also included the Gotthard Base Tunnel, and will cut journey times between the two cities to less than three hours. The tunnel will also offer a substantial improvement in local services with the Tilo service set to benefit from 10 new Stadler Flirt EMUs when the tunnel opens and another four to follow in 2021.