Construction of the tunnel began 10 years ago. 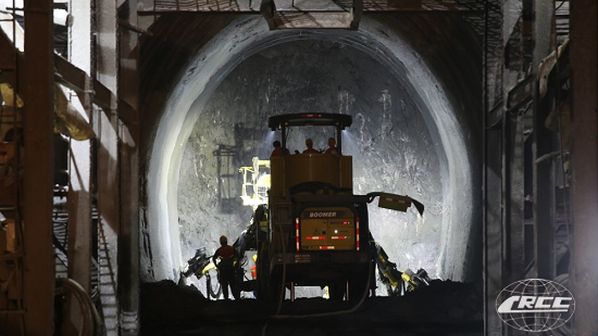 DRILLING of the Yuelongmen Tunnel for the Chengdu - Lanzhou line in China has been completed, 10 years after construction began. The tunnel consists of twin bores, namely the 19.9km left bore and the 20km right bore.

The 200km/h Chengdu - Lanzhou line will form an important part of the Lanzhou - Guangzhou corridor, part of China’s plans to build a network of eight north-south and eight east-west high-speed corridors across the country.

The tunnel, built by China Railway 19th Bureau Group, runs between Gaochuan in Sichuan province and Tumen is the longest tunnel in the Longmeng mountain range with a maximum depth of 1445m. The tunnel climbs 346.3m between its two portals.

The tunnel is located in an area prone to earthquakes, and construction was also hampered by the steep terrain surrounding the construction site.

Chengdu - Lanzou Railway project manager, Mr Wang Hailiang, says the construction of the tunnel also required the development of a new ventilation system to manage noxious gases in the tunnel.

The Chengdu - Lanzhou line will connect with the Baoji - Chengdu, Lanzhou - Chongqing and Chengdu - Xi’an lines to create a corridor connecting northwest, southwest and southern China.