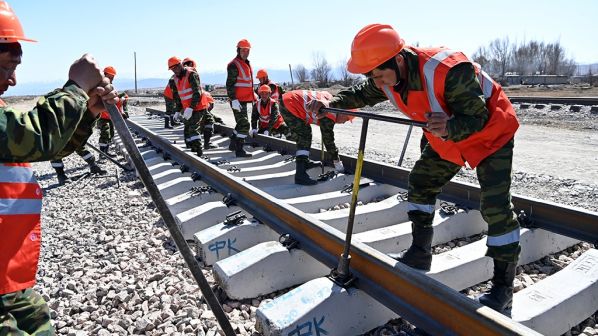 CHINA, Kyrgyzstan and Uzbekistan (CKU) have signed a long-anticipated agreement to push ahead with a feasibility study of building a railway to connect the three countries.

The CKU governments signed the new agreement on September 14 on the sidelines of a summit of the Shanghai Cooperation Organisation (SCO) held in Uzbekistan. However, the document does not set out a roadmap for construction of the CKU link, first mooted 25 years ago but recently given new impetus following Russia’s invasion of Ukraine and the subsequent interruption of rail routes between China and Europe.

Nevertheless, the agreement does move the project one step closer to reality by laying out terms for a feasibility study for the Kyrgyzstan leg, the missing link between China and Uzbekistan. The study will be completed by the first half of 2023.

The CKU link would provide a shorter route to Europe bypassing the Trans-Siberian route through Russia. Although often mooted, the idea building a rail connection across Kyrgyzstan has foundered on grounds of construction cost and the presence of the well-proven Trans-Siberian railway.

At one time Kyrgystan was negotiating with Russia to help finance a new railway through its territory. Now the invasion of Ukraine has meant that Kyrgyzstan’s hopes of financing the project now lie with China instead.

The transport ministries of Kyrgystan and Uzbekistan have signed the CKU agreement with China’s National Development and Reform Commission. The costs of the feasibility study are to be shared equally.

The ministry’s statement also appeared to confirm earlier reports that, after years of wrangling, a route for the proposed line through Kyrgyzstan has finally been agreed.

Kyrgyzstan had originally been pushing for a route that would serve more populated areas further north but now appears to have settled on a route to the south, which will still create jobs during construction and provide further economic benefits in the form of track access charges for transit traffic.

The connecting line will begin at Torugat, a mountain pass where the Naryn region of Kyrgyzstan borders the Xinjiang autonomous region of China, and will then continue across Kyrgyzstan through Arpa and Makmal to Jalal-Abad in the Kögart river valley, where it will connect with Uzbekistan’s railway network.

There would a break of gauge from China’s 1435mm to the Russian 1520mm-gauge at Makmal.

According to Kyrgyzstan’s transport minister, Mr Erkinbek Osoyev, the 280km route is likely to cost $US 4.1bn, and China would need to build 160km of new railway to its border with Kyrgyzstan.

In the longer term, the new line could be extended through Turkmenistan into Iran and onwards to Turkey, helping to shorten the route from China to Europe by 900km and saving eight days of transit time.