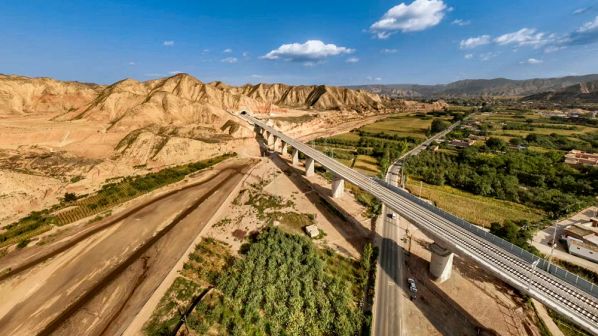 CHINA opened 4100km of new railway in 2022, including 2082km of high-speed lines, according to China Railways (CR) president, Mr Liu Zhenfang, who was speaking at company’s annual conference in Beijing on January 3.

Liu said that over 3000km of new lines are expected to enter service this year, of which 2500km will be high-speed lines. As restrictions to curb the spread of Covid-19 are eased, CR is expecting 2.7 billion passenger-journeys to be made in 2023, an increase of 67.6% on the 1.61 billion recorded in 2022.

New railways opening at the end of 2022 included a 915km double-track electrified route from Chengdu to Kunming which entered service on December 26, designed for operation at up to 160km/h.

The new line has been built parallel to the existing 1096km Chengdu - Kunming route, which is single track with a maximum speed of 80km/h. The fastest journey times from Chengdu have been cut to 3 hours to Xichang, 5 hours to Panzhihua and 7h 30min to Kunming.

The new line was built by 13 units affiliated to China Railway Construction (CRCC), taking nine years to complete with 33,000 people at work on the project.

CRCC says that it applied new technology and equipment to tackle the complex geology along the route, which passes through the Liangshan and Hengduan mountains and crosses the Minjiang, Qingyi, Dadu and Jinsha rivers.

There are seven tunnels over 10km in length, including the 22km Xiaoxiangling Tunnel, and 11 major bridges over 2km in length.

On December 30 passenger and freight trains began using the 290km of new main line between Qingliu and Quanzhou. This completes the 464km route from Xingguo to Quanzhou, where the first 174km from Xingguo to Qingliu opened on September 30 2021.

Designed for a maximum speed of 160km/h, the Qingliu - Quanzhou section has 20 stations. Initial operations have started with three pairs of passenger trains and seven pairs of freight trains, with future service levels to be developed according to operating conditions and market demand.

High-speed lines entering service include the 91km Changde - Yiyang section of the 154km Changde - Changsha route, which opened on December 26. Construction of the route, designed for operation at up to 350km/h, had started in June 2019.

The Yinchuan - Lanzhou line has been designed for a maximum speed of 250km/h. The fastest journey time by rail between the two cities has been cut from 5h 26min to 2h 56min, and up to 15 pairs of trains a day are operated on the route.

On December 30 the first services began operating on the 150km high-speed line from Beijing to Tangshan, designed for a maximum speed of 350km/h.