Colas Rail and TSO speed up catenary renewal in France 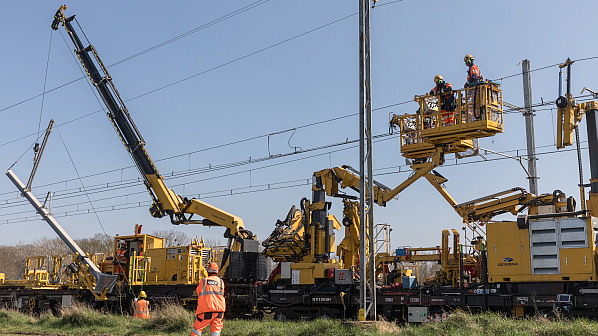 COLAS Rail and TSO Caténaires have unveiled details of two factory trains, which are helping to dramatically increase the speed of catenary replacement on French lines electrified at 1.5kV dc in the 1930s and 1940s.

While a total of 8992km of lines north and east of Paris were mainly equipped with 25kV 50Hz overhead electrification during the 1950s and 1960s, 5812km of lines south of Paris are electrified at 1.5kV dc.

The factory trains have been developed by Colas Rail and TSO in partnership with Geismar and Novium at a cost of €30m and were initially used on the Thionville - Bouzonville line in 2019. The trains avoid the need to deploy multiple road-rail vehicles, helping to improve safety for the 120-person crews responsible for the upgrade work.

Most machines on the trains are radio-controlled from the trackside, and are estimated to reduce deployment to around a quarter of the previous time, potentially increasing the current 300km annual rate of renewal. Indeed, 31 catenary masts were replaced using the train in a four-hour shift in 2021. A normal shift using conventional methods would remove eight masts.

Use of the technique is now extending to the south and west of France. Following a pilot run on the Perpignan - Villefranche-le-Conflent line in 2021, the trains are currently working on the 38km Fleury-les-Aubraus (Orléans) - Beaugency (Blois) section of the Paris Austerlitz - Tours - Bordeaux main line, which was first electrified in 1933. Here they are pioneering a technique to remove existing supporting poles.

The first train prepares the foundations for the new catenary masts. On board the train are five work stations from which teams can work on five masts at the same time. The work consists of boring four holes in the existing foundation (around 90% of the original foundations are considered satisfactory) then inserting and cementing in place four metal rods to which the new masts are fixed. Once the hydraulic mortar is dry, the second train is brought into position. On this staff cut the old masts at their base, remove them as well as all of the support structures for material recovery. Staff then bolt new masts into place, which are already equipped with all of the support structures. The overhead wire is then secured and tensioned. It is possible for the train to renew 30 catenary masts and their wires in a single shift; remarkably, service trains can operate at full line speed once the site is cleared.