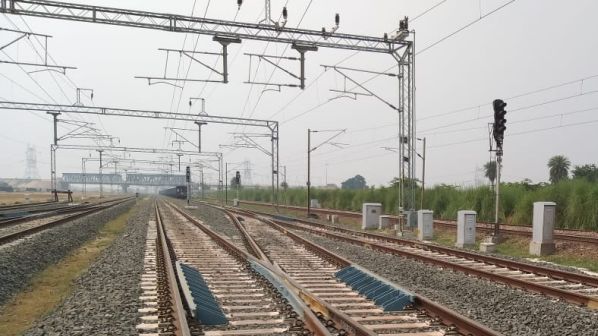 Trial running is underway on the section and the new line is expected to be inaugurated by India’s prime minister Mr Narendra Modi shortly.

Speaking to IRJ, DFCCIL managing director Mr A K Sachhan said: “The work is going on full steam and we hope to make 990km operational by March 2020 and that both DFCs will be commissioned by 2021.”

The Eastern DFC will link Ludhiana in Punjab with Dankuni near Kolkata. The $US 2.11bn 1192km Ludhiana - Mughalsarai section is being funded by the World Bank. Indian Railways is funding the 126km Rs 36.79bn ($US 518.6m) Mughalsarai - Sonnagar section, while the 538km Sonnagar - Dankuni section is being funded through a Rs 122.18bn public-private partnership (PPP) scheme.

The 1504km Western DFC will connect Jawaharlal Nehru Port Trust near Navi Mumbai with Dadri in Uttar Pradesh. The line is being funded by Japan International Corporation Agency (Jica) which is contributing Rs 387.22bn with Indian Railways providing funding of Rs 6.75bn.

The two DFC projects were approved by the Indian government in 2006, but progress has been slow, and several completion deadlines have been missed due to procedural wrangles, land acquisition problems, and difficulty obtaining environment approvals.

The maximum speed on the DFCs will be 100km/h compared with an average speed of 27-30km/h for freight trains on the Indian Railways network. The DRCs will have a maximum axleload of 32.5 tonnes compared with 22 tonnes on the conventional network.

The Western DFC will largely carry containers and imported coal between the existing and emerging ports in Maharashtra and Gujarat and the northern hinterland, while the Eastern DFC will mainly transport coal and steel. According to a World Bank/Jica study, traffic is expected to reach 264 million tonnes for Eastern DFC and 284 million tonnes for Western DFC over a 20-year period. The DFCs will also release capacity on parallel mainline for more passenger trains.