The €277m project is central to the EU’s goal of completing a trans-European core rail network. 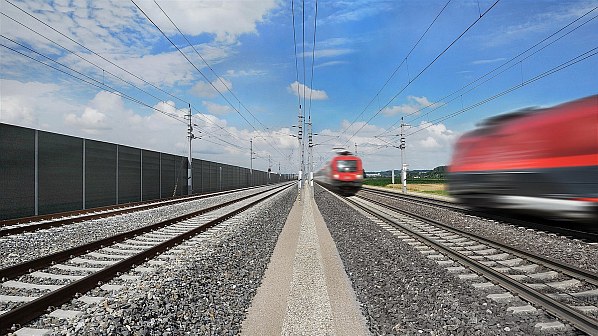 ÖBB has started work on quadrupling another section of Austria's western main line.

WORK has begun on the €277m expansion of Austria’s western main line between Marchtrenk and Wels. Once the project is complete in 2027 there will be four tracks instead of the current two on the 7km section, providing more capacity on the heavily-used line.

Two bridges crossing the A25 highway will be replaced, modern noise protection will be installed and Marchtrenk station is to be upgraded. Funding is being provided by ÖBB-Infrastruktur, the State of Upper Austria and the EU. Austrian Federal Railways (ÖBB) says the third track will be operational from 2026 with the fourth in use from the beginning of 2027.

The upgrade is part of a €2.13bn investment programme announced in January which had a key focus on the quadrupling of the remaining double-track sections on Upper Austria’s Western main line. Two additional tracks are already under construction between Marchtrenk and Linz as part of the plan is for the entire Wels - Linz - Vienna main line to have four tracks.

“In a construction period of around six years, we will create the urgently needed capacities to push forward the shift from road to rail,” says Mr Franz Bauer, ÖBB-Infrastruktur CEO.

Mr Marin Selmayr, head of representation of the EU Commission in Austria said that the modernisation of the western route is a central piece of the EU’s goal to double the high-speed network by 2030 and to complete the trans-European core rail network. He says the track doubling project will remove a significant bottleneck on the Rhine - Danube axis.

For in-depth data on infrastructure projects across Europe, subscribe to IRJ Pro.