The double-track tunnel will remove a bottleneck on the Lausanne - Bienne line. 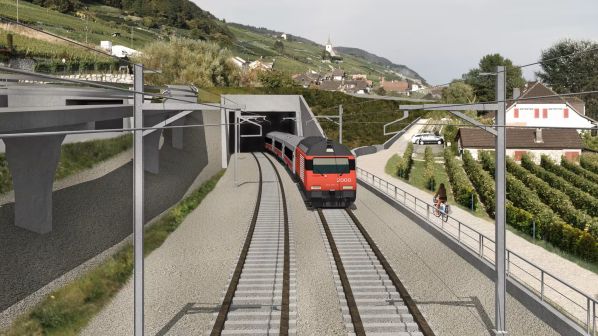 CONSTRUCTION has begun on the 2.13km double track Gléresse tunnel in Bern, which will remove the final single-track section between La Neuveville and Twann on the Lausanne - Biel/Bienne line.

The tunnel has been proposed in some form since 1942, but the existing project was only launched in 2013. The tunnel will allow the construction of a new 4.5km double-track section, which will allow the introduction of a half-hourly timetable and will also allow services to return to normal quicker in the event of a disruption. The tunnel will run parallel to the N5 highway tunnel, and will share the emergency gallery built for the road tunnel.

The project will cost around SFr 431m ($US 462m) and is being funded through the Railway Infrastructure Fund (FIF) approved in February 2014. Douanne station will be upgraded as part of the project, with the platforms raised and ramps installed to improve access.

The project also includes dismantling the existing single-track line, allowing the creation of around 31,000m2 of green space for the local community.

Preparatory work for the project began at the end of 2021, including the realignment of track and the preliminary excavation of the western portal. Work will continue in the summer with the construction of a cut and cover tunnel, while full tunnel excavation using traditional blasting techniques will begin in 2023.

Measures will be put in place to reduce disturbances to local residents, such as the installation of noise barriers with sound-absorbing panels in the main construction areas. Night work will also be kept to a minimum.

The tunnel is expected to open in December 2026.