The line takes the UAE network to the border with Saudi Arabia. 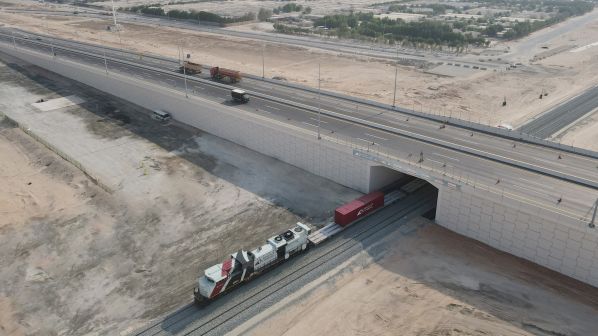 ETIHAD Rail has completed construction of the 139km Stage 2 Package A of the National Rail Network, which runs west from Ruwais to Ghuweifat, connecting the existing 264km south-north Habshan - Ruwais Stage 1 with the border of Saudi Arabia.

The milestone was announced during a virtual meeting of the board of directors chaired by Sheikh Theyab bin Mohamed bin Zayed Al Nahyan, chairman of the Abu Dhabi Crown Prince’s Court and chairman of Etihad Rail. Phase 2 of the Etihad Rail project will extend the network west to Ghuweifat on the border with Saudi Arabia and east to the city of Fujairah on the Gulf of Oman, taking the network to 1200km.

Sheikh Theyab said that at a time where many sectors are experiencing a slowdown due to the challenges presented by the Covid-19 pandemic, Etihad Rail has continued to complete the project according to its clearly defined goals and comprehensive work plan.

Etihad Rail has successfully secured contracts for 40% of the network’s capacity, which is expected to be 60 million tonnes annually following the completion of Stage 2, after securing several commercial agreements including with Stevin Rock, one of the biggest quarrying companies in the world, Western Bainoona Group, and Al Ghurair Iron and Steel (AGIS).

During the meeting, the board also reviewed the company’s financial performance for the third quarter of 2021, approved the capital budget for 2021, and approved the charter of the Audit Committee, which includes a number of policies and procedures related to governance such as transparency, integrity, and institutional work.