The new rail trench in the Capurro area of Montevideo will eliminate several level crossings. 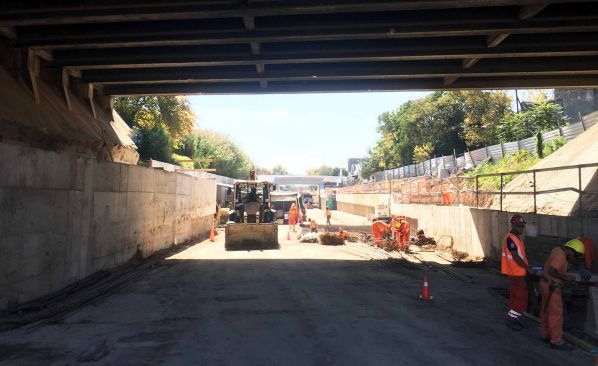 Track laying will start in the Montevideo rail trench later this year.

CONSTRUCTION of 1km railway trench in the Capurro area of the Uruguayan capital on the approach to Montevideo station is ahead of schedule according to the Grupo Vía Central consortium.

“The pile work phase is nearing completion and a large part of the excavation is now complete,” says Grupo Vía Central. “The work began in July 2020 and is well ahead of schedule. It is anticipated that the tracks will be laid in the Capurro rail trench in the last quarter of this year.”

The rail trench comprises two absorbent pile walls made of intersecting concrete columns between which the earth is excavated. Lower height walls are constructed in the traditional way by excavation, formwork, and concreting, or by the installation of prefabricated parts.

“The slabs on Hermanos Gil and Flangini streets are finished; the carriageway and footpaths above are in the process of refurbishment around the slabs,” Grupo Vía Central says. “When these are opened up to traffic, Capurro Street will be shut off for the cover to be placed on the corresponding crossing. At the same time, the cover over Uruguayana Street is in progress.”