No railhead treatment train had passed the accident site for 32 hours. 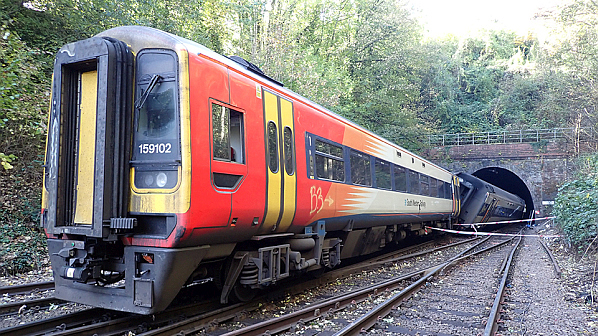 AN interim report published by Britain’s Rail Accident Investigation Branch (RAIB) into a collision at Salisbury on October 31 2021 found evidence of railhead contamination at 12 sample locations in the 3.2km of railway leading up to the location where the trains collided.

The front two coaches of the SWR train and the rear two coaches of the GWR train derailed. Both trains continued into the tunnel following the collision before they came to a stop. 13 passengers and a member of railway staff required treatment in hospital as a result of the accident.

RAIB found that many areas had a medium or heavy level of contamination, and that the thickness of the leaf deposit was relatively consistent through each of the areas surveyed. RAIB said it was likely that the rails were wet at the time of the accident.

RAIB also found that the railhead treatment train (RHTT), which conducts high-pressure water jetting, and which may also apply an adhesion modifier gel to the rails, was due to pass the site at 17.03 but had been rescheduled to around 23.00 because of planned infrastructure work between Southampton and Brockenhurst. This meant there would have been an interval of 32 hours between the RHTT operating through the area, with the last RHTT train passing the junction at 11.06 on October 30.

An article by the RSSB explaining how research into low rail adhesion during autumn is leading to new approaches to solving the problem was published in the February edition of IRJ. Digital subscribers can read it here.