THE Brenner Base Tunnel project has reached a critical new stage after workers successfully bored through a 16.7km exploratory tunnel between the Tulfes-Pfons and Pfons-Brenner construction lots. 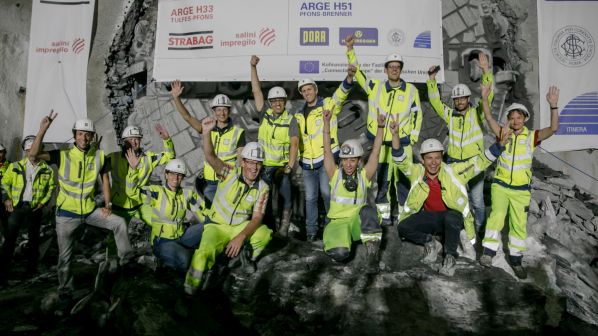 The breakthrough, which occurred at 08.27 on July 6, connects the two Austrian segments, and forms an unbroken 36km tunnel beneath the Alps between Tulfes and Schmirn - around 65% of the tunnel’s 55km projected length. The tunnel boring machine, nicknamed Günther, drilled from north to south through the remaining quartz phyllite rock near (and below) the town of Steinach am Brenner, Tyrol.

The exploratory tunnel is a unique feature of the project. The tunnel is located 12m below the twin-bore tunnel and will be 61km long. It is currently used for exploration of the rock and the construction logistics. Upon the completion of construction, the tunnel will be used for drainage and maintenance.

Construction has been divided into four lots, with two in Austria and two in Italy:

The tunnel is currently scheduled for completion in 2025, with the milestone of half of all total tunneling completed in December 2019. The tunnel will open to rail traffic in 2028. Upon completion, it will connect to the existing Innsbruck bypass tunnel to create a continuous 64km tunnel - the longest in the world.

The Brenner Base Tunnel is a collaborative project between Austria, Italy and the European Union, with both countries contributing roughly 30% of the estimated €8.7bn cost, and the EU contributing the remaining 40%.

The tunnel will be electrified at 25kV ac, rather than the 15kV ac used in Austria, or 3kV dc in Italy, and will be equipped with ETCS Level 2.

The tunnel is intended to address a significant bottleneck on the Scandinavian–Mediterranean Freight Corridor linking Norway, Sweden, Denmark, Germany and Italy, which travels via the Brenner Pass through the Austrian Alps. The current Alpine railway route causes significant delays to rail traffic and has limited rail’s modal share of total freight traffic along the corridor to only 29%, compared with the 71% held by road freight.

“The Brenner Base Tunnel means a shift from the truck to the rail,” says Ms Leonore Gewessler, Austria’s federal minister for climate protection, environment, energy, mobility, innovation and technology. “This is not only good news for the climate, with significant CO2 reductions, but also for the people in Tyrol, because we will be able to increase the number of freight trains from 66 to 225 per day.”

The tunnel will significantly decrease the gradient of the railway from up to 26%, to around 4-7%, allowing for maximum speeds of 120km/h for freight trains and 250km/h for passenger trains - comparing favourably with speeds on the existing Brenner line of 60 to 110km/h. This will shorten travel times between Innsbruck and Fortezza from 1h 45m for freight to 35 minutes, and from 1h 20m for passenger trains to only 25 minutes. In addition, the tunnel will also allow trains to haul 2000 tonnes, compared with 1400 tonnes at present.