BRITISH infrastructure manager Network Rail’s (NR) plans to build a new sea wall at Dawlish to protect the Devon main line were approved by Teignbridge District Council on April 16, paving the way for work to begin at the end of May. 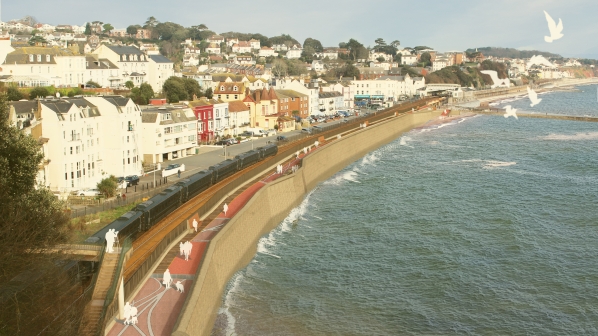 The London - Penzance main line connecting the southwest of England to the rest of the country was closed for two months in 2014 after extreme weather washed away a section of seawall and trackbed, while a massive landslide blocked the line with 20,000 tonnes of material. The Bristol - Taunton and London - Taunton main lines were also flooded to the north and east of Taunton, severing all three lines connecting London and Bristol with southwest England.

The closure prompted the launch of the South West Rail Resilience Programme to identify and implement the best options to improve rail resilience on the line.

Once complete, the new sea wall is intended to provide the railway and town with increased protection for the next 100 years.

“Our plan for the new sea wall will minimise its impact on Dawlish sea front whilst providing the appropriate level of protection from extreme weather for the railway and the town,” says NR managing director for the Western Route, Mr Mark Langman.

“The new sea wall will protect this vital rail artery to the south west for the next 100 years. World leading engineers have designed these plans, having considered hundreds of other options, and it will ensure the railway line is more resilient to extreme weather and rising sea levels for generations to come.”

Work will stop during the peak summer season, to reduce the impact on tourism. In November last year, NR began work on a temporary measures to protect the line, with four breakwaters, the barriers built out to sea to protect the coast from the force of waves, repaired by engineering teams from NR and BAM Nuttall.