The line has reopened with electrified services. 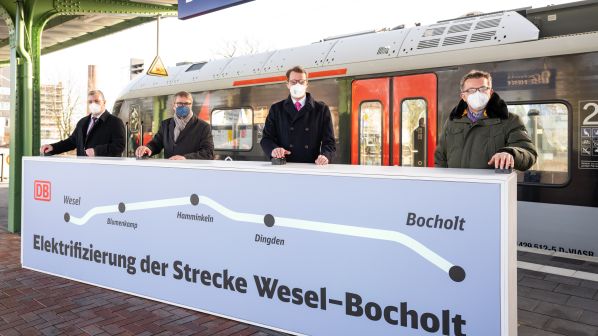 Electrification of the single-track line involved the installation of 355 masts and 24km of contact wire. In addition, 1.5km of track was renewed, four switches were replaced, and 19 level crossings were modernised. The line speed has been raised to 100km/h on the Wesel - Hamminkeln section and signalling was upgraded with control passing to the electronic interlocking at Emmerich.

Dingden, Blumenkamp, Hamminkeln and Bocholt stations were modernised with platforms extended for longer trains and raised to 760mm-high to enable level boarding. A tactile guidance system to aid visually-impaired passengers has also been installed at stations.

The €50m project was jointly funded by Westphalia-Lippe Local Transport (NWL) and Rhine-Ruhr Transport Association (VRR), which contributed a total of €30m, and DB, which provided €20m.