High-performance replacement to be used for first time. 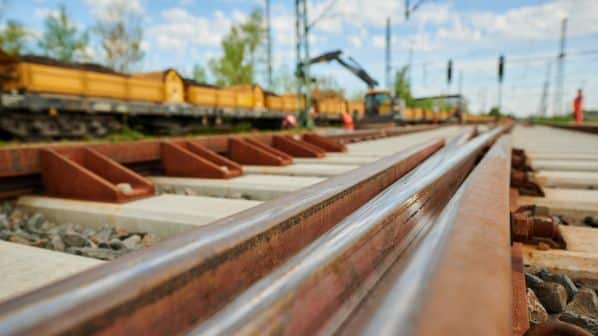 DB is planning to use its new high-performance replacement approach for the first time on overhauling the Frankfurt am Main - Mannheim Riedbahn.
Photo Credit: Stefan Wildhirt/DB

GERMAN Rail (DB) is planning a complete overhaul of a heavily-used section of its network between Frankfurt am Main and Mannheim, which will be the first project to adopt a new high-performance replacement approach, with all tasks completed in just five months.

This new approach, which combines all work needed into one rapid work package to reduce disruption on core parts of the national network, was announced by DB and the German federal government in June.

According to DB CEO, Dr Richard Lutz, network renewal will be a key task over the coming years.

Under the high-performance network programme, which will cover the most congested 10% of the network carrying around 25% of services, all outdated and failure-prone components will be replaced and improved, comprehensively eliminating the investment backlog on these lines.

Instead of separately maintaining sleepers, ballast, track, points, signals, interlockings and platforms based on their individual condition, these will all be replaced and upgraded during a single line closure, removing the need for future maintenance for some years.

In addition, to increase performance, lines will be upgraded with state-of-the-art equipment, with many small and medium-sized upgrades combined to improve reliability, while high-output and capacity-saving construction methods will be used.

In the case of the Frankfurt am Main - Mannheim route, known as the Riedbahn, the project team will use these methods and coordinate work to complete the upgrade in record time. DB aims to renew all systems and modernise 20 stations along the route during a single five-month closure.

DB will start work on July 15 2024, the day after the final match in the UEFA European Football Championship, which Germany is hosting.

During the line closure, around 1200 control and safety systems, 152 points, four level crossings and more than 10km of noise protection walls will be removed between Frankfurt am Main and Mannheim so they can be renewed. New passing loops will be installed and the line will be equipped for future digital operation.

The aim is to complete the entire programme by Christmas 2024 and in the coming months the planned diversionary routes for passenger and freight trains will be prepared in consultation with rail operators.

“The Riedbahn is the first building block on our way to a high-performance network,” says DB board member for infrastructure, Mr Berthold Huber. “Nowhere else in Germany is the infrastructure under as great a strain than between Frankfurt am Main and Mannheim as around 300 local, long-distance and freight trains run on the route every day. That’s why our new concept starts right here.”