The country is investing DKr 86bn in rail over 14 years. 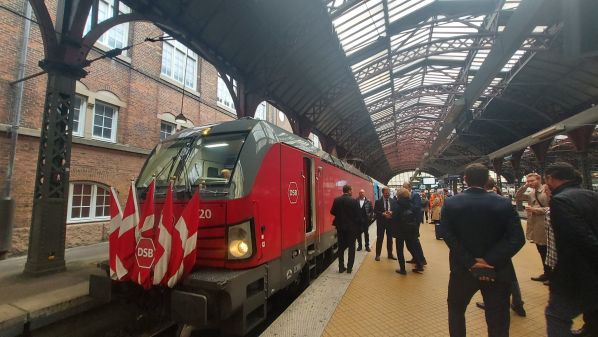 The Connecting Europe Express was hauled from the German-Danish border to Copenhagen by one of DSB's new Vectron locomotives.
Photo Credit: David Burroughs

IRJ on the Connecting Europe Express: Danish minister of transport, Mr Benny Engelbrecht, says Denmark has an important role to play in connecting the European and Nordic railway systems, as the country looks to increase investment in its railway infrastructure.

But, speaking during the welcoming ceremony for the Connecting Europe Express in Copenhagen on October 1, he pointed out that more work was needed to simplify the regulatory systems across Europe to make it easier to operate cross-border.

“With our unique location, it’s necessary to take responsibility for connecting the continent and the Nordic Region and to make the necessary connections to the rest of Europe, which a stop in Copenhagen today illustrates so perfectly,” he says. “It also underlines the importance of the Fehmarnbelt fixed link not only for Denmark, not only for Germany, but for all of Europe.

“The fact is that we depend on our railways, and in more than one sense as the railway becomes an important tool in the green transition. I am proud of the fact that the Danish government recently [reached] a broad political agreement with all parties in the Danish parliament. With the 2035 infrastructure plan we have allocated DKr 86bn ($US 11.5bn) from DKr 161bn for railway projects over the next 14 years. It underlines the fact that a united parliament agrees on railways being an essential part of the public transport system now and in the future. It is important to emphasise that the projects in the plan are fully funded and each of the projects contributes to improve and strengthen the railway and support a greener future.”

Engelbrecht said it was encouraging to see the revival of night trains from and through Denmark, but also highlighted the regulatory and technical obstacles posed by varying standards in different countries, especially Germany.

“Germany becomes an obstacle to cross when you want to operate night trains,” he said. “We need to eliminate such barriers in order to make rail great again. And I’d like to say that that’s one of the things that I’d like to discuss with the future German government as well.”

DSB CEO, Mr Flemming Jensen, highlighted the operator’s efforts to renew its fleet, including the purchase of 34 Siemens Vectron locomotives, one of which hauled the Connecting Europe Express from the German-Danish border to Copenhagen. He said the train, and the wider European Year of Rail, highlighted rail’s environmental benefits and safety, as well as its ability to reduce congestion.

But he added that the train also highlighted the challenges still faced by the sector when operating cross-border.

“We need to be better in the sector to get standardisation rolling, we need to get the same signalling systems, and we need to get the same radios,” he says. “It’s a huge effort, it’s going to take a lot of investment because from the beginning this industry is a very national industry where each country has its own standards, which is now a big obstacle for us.”

He said more passengers were interested in taking the train, adding that it needed to be easier to book a ticket and plan the journey. “Just a small thing like being able to buy a ticket six months in the future is something that we obviously must find ways to do,” he says.