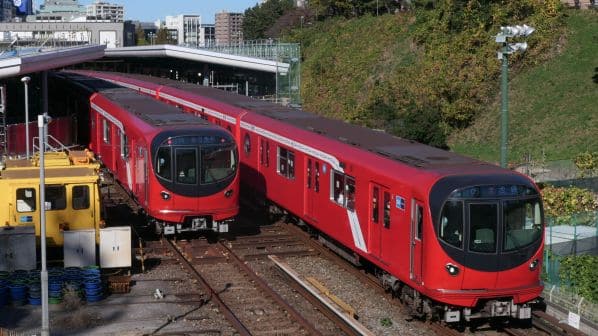 Tokyo Metro Series 2000 trains on the Marunouchi Line, where testing of the CBTC system has begun prior to its introduction on commercial services.
Photo Credit: MaedaAkihiko/Wikipedia Commons

THE Tokyo metropolitan government has announced a draft plan to build a new metro line connecting the city centre with waterfront areas of the Japanese capital.

According to the draft plan, the 6.1km line will have seven stations and will run from Tokyo Station to Tokyo Big Sight, also known as the Tokyo International Exhibition Centre. Located in the Ariake Minami district of Tokyo Waterfront City, this venue is the country’s largest convention and exhibition centre and the metropolitan government wants to make the surrounding waterfront area a “world-class destination.”

The line will also run near redevelopment areas where the Tsukiji wholesale fish market and the Tokyo Games’ athletes’ village were formerly located.

Since the summer 2021 Tokyo Olympic Games there has been a rise in development of high-rise apartment blocks along the waterfront, creating a growing transport demand. The metropolitan government aims to open the new metro line to meet this need by 2040, with the cost of the project estimated at Yen 420-510bn ($US 3-3.8bn).

Also being considered for the future are connections to the Tsukuba Express line, which is expected to be extended to Tokyo Station, and a planned East Japan Railway (JR East) line between the city centre and Tokyo’s Haneda International Airport.

Meanwhile, during the course of 2024 Tokyo Metro plans to introduce CBTC on the complete Marunouchi Line between Yotsuya and Ogikubo. Tests began in November on a section of the line stations in hours after the normal service had stopped running.

In April of this year Tokyo Metro received government permission to build two other extensions; one adding a 4.8km branch to the Yurakucho Line from Toyosu north to Sumiyoshi, and the other adding 2.5km to the south of the Namboku Line from Shinagawa - Shirokane-Takanawa. Both are due to be completed in the mid-2030s.