WEBUILD has celebrated two tunnelling breakthroughs on the Valico Tunnel and the Serravalle Tunnel as part of the €6.9bn Terzo Valico rail project to improve the rail link between Genoa and Milan. 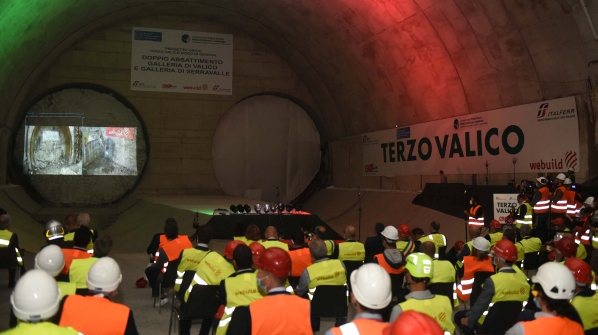 The milestones were celebrated with an event in Serravalle Scrivia.

The breakthroughs will allow for the work sites along a 17km section to be connected.

The breakthrough along the Valico Tunnel, completed with traditional excavation methods, is the first of a number of breakthroughs that will occur along the27km tunnel. The section includes the Camerone di Valico Nord, a 540m2 “underground cathedral” that is 30m-wide and 22m-high.

The second breakthrough was in Serravalle Tunnel, with 6.4km of the total 7km completed using the 115m-long Giovanna Tunnel Boring Machine (TBM) which has a 10m-wide bore. The TBM bore through complicated terrain near the Serravalle Designer Outlet and the existing Genoa - Turin line that required the use of an innovative monitoring system above and below ground.

As well as the construction of the main line, the project includes four connections with Voltri, Genova Parco Campasso, Novi Ligure and Tortona to connect the line with the existing network.

“We are proudly here today for a double breakthrough, and the opening of these two tunnels serve as an example of the extraordinary expertise of so many people,” Salini says. “There are many families who are worried about their future, and the government has to confront this emergency by giving a concrete response to jump start employment and relaunch public works. This is the only way for us to give our country strategic projects as Terzo Valico is for northern Italy.”