PLANS for the €600m renovation of Paris’ Gare du Nord station were approved on July 7, despite resistance from city officials. 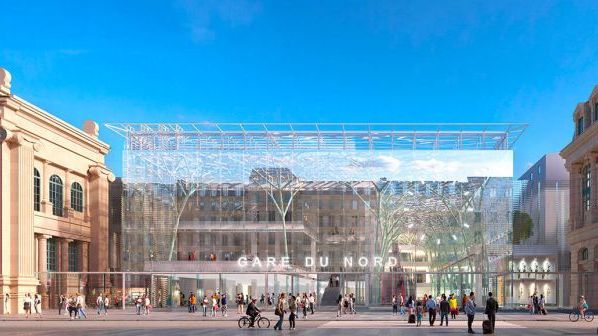 The expansion is intended to accommodate for rising footfall at the station, which is expected to increase from around 700,000 passengers per day at present to 800,000 by 2030. The station currently serves as the Paris terminus for Eurostar and Thalys international services, as well as four suburban rail and two metro lines.

The plans include 46,000m2 of floor space for shops, offices, a gym, a concert hall and other cultural venues, as well as an expanded arrivals and departures hall, parking for 2000 bicycles and a 11,400m2 roof terrace with a view of the Sacre Coeur basilica.

The renovation is intended to improve Gare du Nord’s capacity and environmental sustainability. It is also hoped that the upgrade will improve the attractiveness of public transport in the Île-de-France region.

The work is currently scheduled for completion before the start of the 2023 Rugby World Cup and 2024 Olympic and Paralympic Games, which will be held in the city.

The project has received support from national and regional governments, but has drawn the ire of Paris city officials, who criticise the scheme as too focused on commercial space.

“The state has decided, against the opinion of the city and its citizens, to transform Gare du Nord into a shopping centre,” says Mr David Belliard, a city councillor.

The project will be implemented by Semop Gare du Nord (SGN), a public-private partnership (PPP) of SNCF Stations & Connections, and property developer Ceetrus, which was granted a construction permit on July 6.