10-year programme to renew and refurbish 800km of catenary. 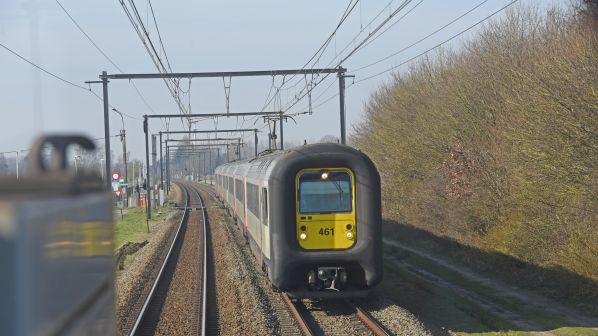 BELGIUM’s federal minister for transport, Mr Georges Gilkinet, has proposed that the government provides €605m for infrastructure manager Infrabel to undertake a major catenary renewal and modernisation programme between 2022 and 2032.

According to Infrabel, 800km of catenary will have to be renewed by 2032 and a further 1300km refurbished in order to remain in service for another two decades, as 19% of the catenary is already 60 years old and has reached the end of its working life. Infrabel CEO, Mr Benoît Gilson, describes the task as “one of the biggest challenges facing Infrabel over the next 10 years.”

Of the 6500km of running lines on the Infrabel network, excluding yards, sidings and depots, 5900km is electrified, mostly at 3kV dc, with 25kV ac deployed on some sections of the conventional network, notably between Dinant and Athus in Luxemburg.

Catenary replacement work is already underway at a number of locations, including between Namur and Jemeppe-sur-Sambre on the route running across Wallonia from Mouscron to Liège, and from Libramont to Arlon.

Infrabel says that work is scheduled for sections of the main line between Brussels and Luxemburg, including Ottignies - Namur and Namur - Arlon, as well as from Ottignies to Leuven.

Infrabel says that the proposed investment is necessary to guarantee the performance of rail transport in the short and medium term, even with alternative technologies such as battery-powered or hydrogen-powered trains under development.

One risk to the project, however, is the lack of personnel qualified in railway electrification work. Infrabel says that it needs 930 new employees this year, but has so far only attracted 500.

“Doubling the number of rail passenger-journeys and the volume of freight moved by rail is the federal government’s target for 2030, and it will only be possible with an efficient and robust rail network,” Gilkinet says. “My proposal to the government is to invest €605m over 10 years to overhaul the entire network and install cutting-edge electrification equipment.”