The line will now run along its original alignment north of Kuala Lumpur. 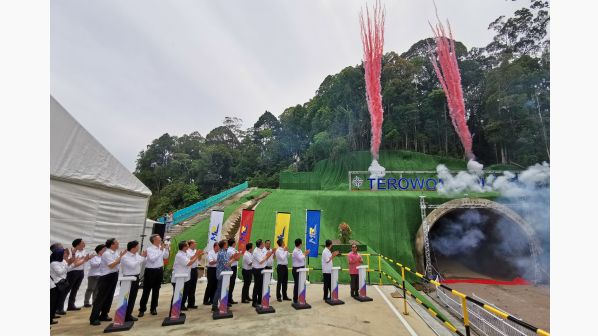 MALAYSIAN transport minister, Mr Datuk Seri Wee Ka Siong, has announced the alignment of the eastern section of the East Coast Rail Link (ECRL) will revert to its original design around the north of Kuala Lumpur instead of south of the capital.

“The original alignment for Section C, which is also known as the Northern Alignment, will see the ECRL traverse from Mentakab to Port Klang via Bentong, Gombak and Serendah, compared with the Southern Alignment via Negri Sembilan,” Wee told a press conference earlier this month.

The realignment means the line will largely follow the route originally planned when the project was launched in 2016 by former prime minister, Mr Najib Razak, The Malay Mail reports. The latest alignment will be 201km long, with a 32.4km branch line, compared with the 185km line under the previous plan, which included a 41.5km branch line.

The full line, now dubbed ECRL 3.0, will run 665km between Kota Baru and Port Klang. The Northern Alignment will have seven stations in total, with five due to be built in the first stage: Temerloh, Bentong, ITT Gombak, Serendah and Jalan Kastam in Port Klang.

ECRL 3.0 consists of three sections. Section A runs from Kota Baru in Kelantan to Dungun in Terengganu; section B from Dungun to Mentakab in Pahang; and section C from Mentakab to Port Klang in Selangor.

China Communications Construction Company (CCCC) was awarded an engineering, procurement, construction and commissioning contractor for the project when it was first launched and is considered part of China’s Belt and Road Initiative.

Construction began in 2017 but was suspended in July 2018 after former prime minister, Dr Mahathir Mohamad, decided to withdraw from Chinese-backed infrastructure projects on economic grounds. However, the government announced in April 2019 that construction would resume after reaching an agreement with China to reduce the total cost of the project from Ringgits 65.5bn ($US 15.9bn) to Ringgits 44bn.

Contractors completed tunnelling on the first of 56 tunnels for the line on April 9, six months ahead of schedule despite delays caused by renegotiation between the Malaysian and China governments, and a nine-month delay due to the Covid-19 pandemic.

The Paka Tunnel in Terengganu was completed using the drill and blast method. Work began on the tunnel in April 2018.