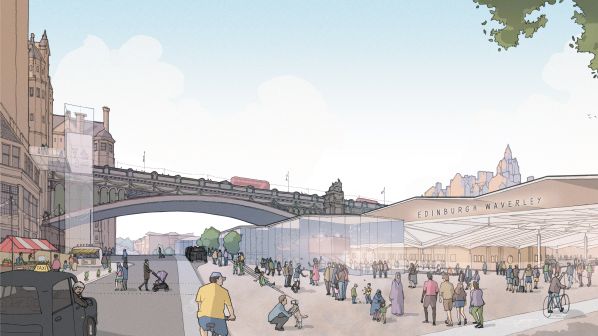 The Waverley Masterplan, which cost £500,000 to develop, was created as part of a collaboration between NR, the Scottish government and Edinburgh City Council, and is intended to address the growing levels of footfall in the station. Currently, Waverley Station serves around 30,000 passengers a day, and this is expected to double by 2045.

The concept is designed to maximise the use of space in the station within existing limitations, and to significantly increase passenger capacity.

In particular, the plan includes extensions to some platforms with the intention of introducing longer trains as an alternative to the introduction of entirely new services, which are restricted by the limited capacity of the Calton and Mound tunnels immediately east and west of the station.

Under the new plans, a new mezzanine concourse would also be introduced to accommodate for the expansion at platform level, significantly improving passenger space and accessibility without impeding platform extensions.

The plan includes proposals for new transport interchanges, including new bus and tram hubs on Princes Street and North Bridge, as well as a vertical ‘urban lift’ to connect Market Street with North Bridge, which passes over the street. The planned concourse would also improve pedestrian travel times across the city, significantly enhancing connections between Old Town and New Town.

Steps into the station would be removed to improve accessibility while storage for 1800 bikes is planned near entrances. The plan is intended to prioritise movement by foot, cycle and public transport in the city centre, reducing the number of road vehicles in the city by around 25%.

The central booking hall would be upgraded with improved waiting and toilet facilities, as well as additional quiet, faith and work spaces, with an improved selection of retail and food facilities included in the proposal.

However, the plan acknowledges concerns regarding significant alterations to the architecture of the station, which is classified as a category A building of historical significance. Under the current plans, alterations to the 19th century glass roof are required to incorporate the new mezzanine, with two possibilities proposed:

The plan proposes separating all service and delivery vehicles from the station, with internal distribution of goods being conducted via goods lifts and service corridors. A new dedicated service yard would be constructed on the site of the current surface car park, with an access ramp off East Market Street which would replace existing service access via Waverley Bridge.

The plan is part of a broader capacity expansion across Scotland’s network, which includes three new commuter stations in Edinburgh at Edinburgh Gateway, which opened in 2016, and East Linton and Reston, which are currently under construction. The plans are also in line with Edinburgh city council’s City Centre Transformation Programme, which aims to significantly reduce private car traffic in the city centre to reducing congestion and pollution.

Further work due to undertaken between 2020-2021 will include technical reviews and appraisal, selection and design of various options outlined in the plan and the outlining of the business case, and will be conducted through the involvement of key stakeholders, rail users and the public.

The proposed redevelopment is expected to be implemented in several phases which align with other rail network enhancements in southeast Scotland, and progress is expected to be dependent on the availability of funding at any given time.