The railway signed a wildlife preservation agreement in Fujairah on March 3. 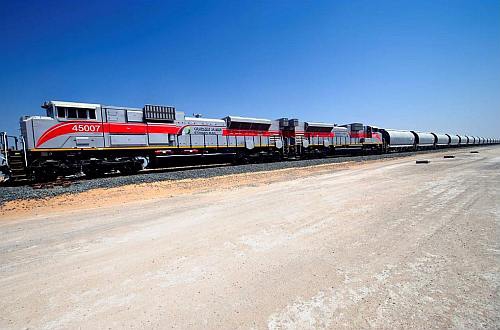 ETIHAD Rail, UAE, has begun the relocation of wild animals from the Misanad Protected Area in the emirate of Sharjah to new habitats, as part of the ongoing development of the UAE’s national rail network, which will run through the area.

The relocation is being carried out in cooperation with the Sharjah Environment and Protected Areas Authority (EPAA), alongside environmental experts, specialists and relevant national authorities, and is in line with Etihad Rail’s commitments to reduce its impact on communities and natural diversity along the railway’s planned route.

The Etihad Rail project will eventually span 1200km of line connecting the major cities of the UAE. Construction of the 139km Stage 2 Package A section began in January. The section will connect Ghuweifat on the Saudi Arabian border, to the existing Ruwais - Shah Phase 1 section, which opened in January 2016.

The conservation project follows the signing of an agreement by Etihad Rail on March 3, alongside Emirates Nature-WWF, Fujairah Environment Authority and Fujairah Adventures, to implement an environmental conservation and habitat rehabilitation project near the village of Al Bithnah in the emirate of Fujairah. The signing of the agreement was witnessed by Crown Prince of Fujairah, Sheikh Mohammed bin Hamad bin Mohammed Al Sharqi.

The joint environmental conservation and habitat relocation project is intended to encourage collaboration between the government, private sector and local communities for the preservation of ecology in the area.

The project will commence with a series of community consultations with residents of the Al Bithnah community on their locality and the area’s history, as well as discussing potential ecotourism projects. Subsequently, teams will work to restore the ancestral Falaj irrigation system, alongside improvements to the efficiency of current water channels with pipe infrastructure.

The project partners will also develop a new nature and heritage trail in Al Bithnah, in collaboration with local tourism and government authorities in Fujairah, and will conduct a comprehensive biodiversity study of the region will also be conducted to determine water quality, identify environmentally significant habitats, alongside seeking to enable preservation of local biodiversity.

“Through this project our aim is to protect, restore and sustainably manage ecosystems to meet biodiversity and societal goals,” said Ms Laila Mostafa Abdullatif, director general at Emirates Nature-WWF following the signing. “Generating crucial societal benefits lies at the heart of this initiative, and highlights again that healthy, diverse and functional natural systems are the necessary foundation for social and economic progression in the UAE.”