The station is key to the introduction of several new Spanish high-speed routes. 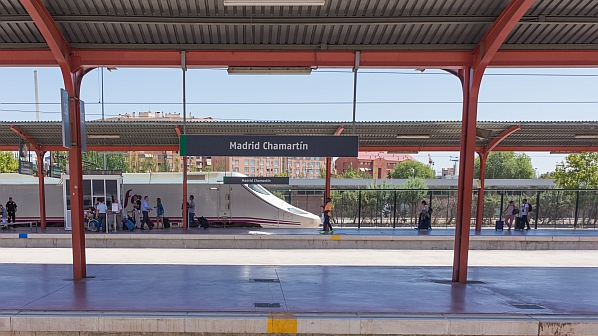 More than €200m will be spent upgrading the station.
Photo Credit: Shutterstock.

MADRID Chamartín station is to be upgraded in a €207m project that will include the construction of four additional platforms for high-speed services on its east side.

Spanish infrastructure manager Adif AV approved the scheme in late-December, with funding provided through the European Union’s (EU) Next Generation EU (NGEU) programme agreed by the EU in response to the Covid-19 pandemic.

The remodelling will create three different areas for passengers, with a boarding area for high-speed trains, an area for the Cercanías commuter services, and another for long-distance main line passengers. An underground connection between the Cercanías platforms and the Madrid metro will also be constructed.

The project is expected to take five years to complete and will also include the remodelling of the station concourse. Eventually the station will have 25 platforms of which 12 will be standard-gauge. A separate project is already underway to convert two tracks to standard gauge to increase high-speed service capacity at the station.

The €207m scheme is aimed at making the station ready for the opening of the tunnel that will connect the station with Atocha station enabling AVE services from the south and eastern routes to serve the station as well as being able to operate to the north and north west of the country. The station will also be the terminus for the high-speed service to Madrid-Barajas Adolfo Suarez airport.

For data on infrastructure projects in Spain, subscribe to IRJ Pro.