SOUTH Africa’s commuter rail services have all but ground to a halt following a cable theft epidemic and widespread vandalism that has prevented Metrorail services from operating across most of its network. Almost the entire Metrorail network, which is also partially used by Transnet Freight Rail (TFR) services, has been affected. 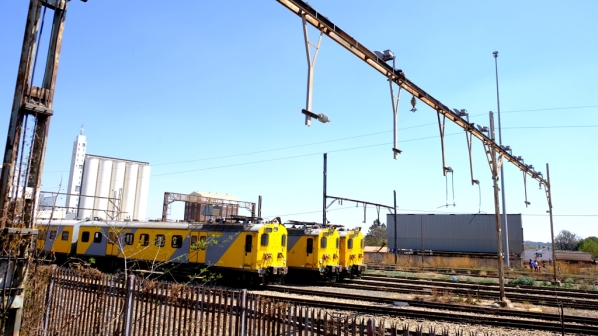 Hundreds of kilometres of overhead cables, signalling wires and catenary masts have been stolen, affecting every Metrorail route in the province of Gauteng, South Africa’s economic heartland.

Stations have also been destroyed on the commuter rail corridors around Johannesburg, with buildings reduced to rubble and platforms torn up by thieves looking for signal wiring.

Metrorail’s parent company, the Passenger Rail Agency of South Africa (Prasa), has belatedly moved to halt the devastation by deploying thousands of security guards to protect the stations and patrol the lines. However, the damage is now estimated to run into billions of rand.

The operator recently hired and deployed 3000 new security guards to protect its corridors after terminating the contract with the previous security company.

During a webcast to reporters in May, Prasa administrator, Mr Bongisizwe Mpondo, said the operator had made good progress to fix its “broken business”.

Reduced services have been reintroduced on just seven of Metrorail’s 34 commuter lines as the country emerges from an economically devastating coronavirus-induced lockdown.

Just two of Metrorail’s 16 routes in Gauteng are currently operating, with a limited service between Pretoria and Pienaarspoort, north of the city, and between Naledi, Soweto, and Johannesburg. Both services use Metrorail EMUs hauled by diesel locomotives hired from Transnet.

On the once-busy 35km main line between Johannesburg’s Park station and the western mining town of Randfontein, around 60km of cable was stolen during the lockdown. No commuter trains are running on this line while the handful of Transnet-operated freight trains still running are often caught in cables left dangling by the thieves.

Rail has also been stolen in numerous places, including in Cape Town where an informal settlement has spread over what was the formerly the right of way for one of the city’s busiest lines.

A single service is operating in Cape Town with another due to begin soon. Both will be operated by new Alstom Xtrapolis EMUs built by the Gibela consortium.

The ongoing destruction has implications for Gibela’s Rand 51bn ($US 3bn) contract to produce 600 new EMUs to replace Metrorail’s ailing 50-year-old EMUs. While the company has supplied 38 Alstom Xtrapolis trains from its purpose-built factory near Johannesburg, they are currently unable to operate due to the damaged infrastructure.