The company plans to publish a tender for the systems next year. 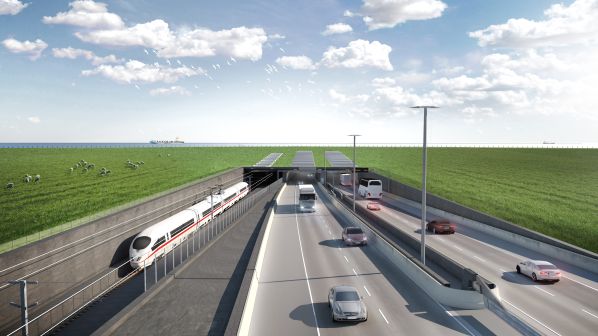 An artists impression of the portal and ramp to the tunnel.

FEMERN, the company overseeing the construction of the Fehmarnbelt tunnel between Denmark and Germany, has issued a prior information notice (PIN) ahead of the launch of a tender next year for the track and catenary systems for the tunnel.

Construction of the road and rail tunnel began in November 2021. When completed in 2029, the 18km tunnel between the islands of Lolland in Denmark and Fehmarn in Germany will be the longest immersed tunnel in the world. The tunnel will provide a more direct route between Copenhagen and Hamburg, and from Scandinavia to mainland Europe, by removing the need to travel west via the island of Funen to Fredericia on Jutland and then south to Padborg on the German border.

Following the publication of the PIN on the EU tender portal, companies interested in contributing to the process will be invited by Femern for individual discussions.

The overhead catenary system includes 18.4km within the tunnel, as well as 4km on the Danish side and 3km on the Germany side along with a connection to the traction power substation on Lolland.

“The Fehmarnbelt tunnel and its railway is a unique project that requires very special solutions,” says Femern technical director, Mr Jens Ole Kaslund. “Exciting developments are underway to deliver climate-friendly and energy-efficient solutions and we are very much aware of this. Therefore, we want to invite potential bidders to contribute to our knowledge and thus ensure that the final invitation for tender is as strong as possible.

Femern expects to complete the discussions with interested parties in 2022. The actual tender is expected to be published by spring 2023 with a final winner of the TTC contract to be announced in spring 2025.

“This is a significant stretch of railway with several special factors, where the space in the tunnel and our environmental requirements in particular play important roles,” Kaslund says. “We hope that a number of players on the market will find the challenge and the task interesting and contribute with their know-how.”

The PIN can be found here.

An in-depth feature on the Fehmarnbelt Tunnel was published in the October 2021 issue of IRJ, and is available for online subscribers here.