“Exceptions should be made” under planned TEN-T directive for new lines to be built to 1435mm. 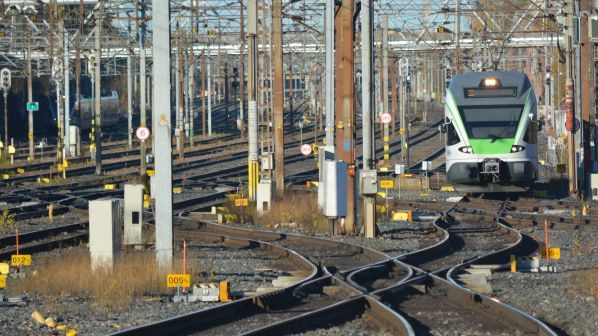 The Government of Finland believes that changing from its 1520mm national gauge to 1435mm as suggested in an EC proposed directive would be neither financially nor functionally viable.

FINLAND’S minister of transport and communications, Mr Timo Harakka, says that a European Commission (EC) proposal to revise the Trans-European Transport Network (TEN-T) Regulation is unreasonable for his country.

The EC announced in July a TEN-T proposal that new lines should be built to the European standard gauge of 1435mm, and key routes of other gauges converted to that track width, to ensure interoperability between countries, except where this could not be justified on cost: benefit grounds. The proposal relates principally to cross-border connections with the 1520mm gauge railways of Ukraine – but the same Russian track gauge is compatible with 1524mm-gauge used throughout Finland.

The proposals announced by European commissioner of transport, Ms Adina Vălean, included measures to convert 1520mm-gauge lines to 1435mm gauge when this is economically justified. She said this would also apply to non-standard track gauges within the EU itself, as the difficulties at the Ukraine border had highlighted how a lack of interoperability could increase the vulnerability of the railway network inside EU territory.

However, the EC proposal that new routes should be built to 1435mm without exception, and longer-term plans made to convert existing lines, is seen as unreasonable by the government of Finland. As new projects begun before the new directive would not come under its terms, the 1435mm gauge requirement would apply only to the three new rail schemes currently underway in Finland: the Eastern Railway project, the Suomirata project to provide a journey time of 1 hour between Tampere and Helsinki, and the Espoo - Salo section of the Turku One Hour Train Project. These are to be TEN-T core network routes.

“Finland does not accept changes to the track gauge, and I believe that our views will be listened to during further discussions,” says Harakka. “It is completely clear that Finland’s special conditions must be taken into account and our track gauge must be maintained. Changing the gauge would not be financially viable, but it would also not be functionally viable. Hasty decisions should not be made on matters of such significance - the effects should be assessed broadly.”

Finland also takes exception to parts of the EC proposal to downgrade routes leading to the borders of Russia and Belarus. The EC is now proposing that the core TEN-T network should now end at Kouvola instead of Vainikkala, , and that the Scandinavian-Mediterranean European Transport Corridor should end at Kouvola and the ports of Kotka and Hamina rather than at the Russian border.

“These transport connections will still remain on the TEN-T network and it is possible to receive EU funding for them,” says Harakka. “However, the change should not weaken eastern Finland’s position, so we do not accept this change proposal either.”

Finland was already proposing that there should be exceptions made to the TEN-T Regulation proposals in the early part of this year, before the standard gauge requirement and downgrading of connections with Russia and Belarus were proposed by the EC. Back in February Finland pointed out that the full implementation of the requirements of the draft regulation regarding the rail network would mean costs of several billion euros and that EC requirements should be amended to take into account the country’s unique position.

The EC was also proposing that the western Finnish ports of Kaskisten and Pietasaari should no longer be included in the TEN-T comprehensive network, but the government of Finland believes they should maintain their status and that the core and comprehensive TEN-T networks ought to be expanded in Finland rather than reduced. It argues that for Finland, infrastructure that facilitates export,  in particular seaports, are exceptionally important.