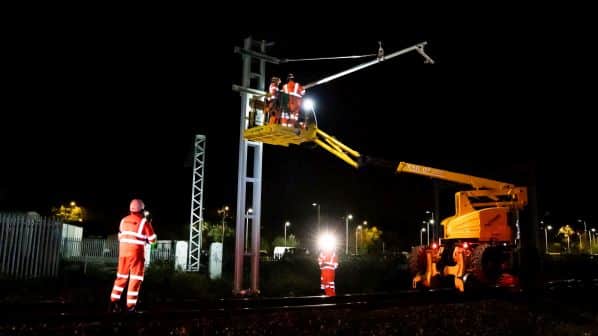 TRANSPORT for Wales (TfW) has announced that “another major milestone” has been reached in the delivery of the South Wales Metro (SWM) project with the start of work to install overhead electrification.

Catenary masts and overhead wires to carry 25kV ac are now being installed on the route between Radyr and Cardiff, part of the Core Valley Lines (CVL) network serving the Welsh capital.

The South Wales Metro project includes the electrification of 170 track-km on the CVL, comprising the routes from Cardiff to Treherbert, Aberdare, Merthyr Tydfil, Rhymney, Coryton and Cardiff Bay.

Due for completion in 2023, the upgrade will enable the introduction of tram-train services under the SWM project.

TfW says that the CVL upgrade is costing a total of £750m.

The SWM project is being funded with £445m from the Welsh government, £125m from the British government funding and a £136m grant from the European Regional Development Fund (ERDF).

According to TfW, SWM will transform travel for the people of South Wales by delivering faster and more frequent services. It will also significantly improve connectivity and provide access to jobs, leisure and other opportunities.

“Installation of the first electrical lines is a major step forward for us at TfW and once completed, this programme of works will provide greener transport for the future,” says TfW director of safety and sustainability, Mr Leyton Powell.