The 2.2km bridge provides a direct connection from China to the Trans-Siberian Railway. 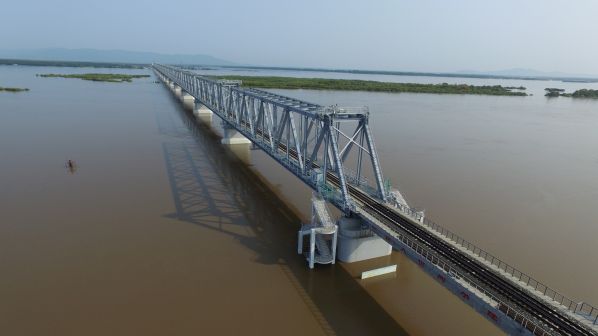 CHINA and Russia have completed the construction of the China-Russia Tongjiang-Nizhneleninskoye bridge, the first cross-border rail bridge between the two countries, seven years after construction on the 2215m structure began.

Testing of the bridge is due to begin later this month, with partial services beginning by the end of the year and full services launching in 2022. The dual-gauge bridge can carry trains operating on Russia’s 1520mm-gauge and China’s 1435mm-gauge tracks, with Russian-gauge trains able to travel 15km to a depot in China.

The bridge crosses the Amur River to connect the Chinese city of Tongjiang, in the northeastern Heilongjiang province, with Nizhneleninskoye in Russia’s Jewish Autonomous Region, providing a direct connection to the trans-Siberian Railway. 1886m of the bridge is in China.

A ground-breaking ceremony for the project was held in February 2014, with the bridge completed in 2019, and the final piece of track laid on August 17. The opening of the rail bridge follows the completion of a road bridge between Heihe in China and Blagoveshchensk in Russia in 2019, with much of the Chinese-Russian border following rivers.

The bridge reduces the distance from China’s Heilongjiang province to Moscow via Tongjiang by 809km, reducing the transit time by 10 hours. The bridge can carry 21 million tonnes of freight per year.