The new line will eventually link Umeå with Luleå. 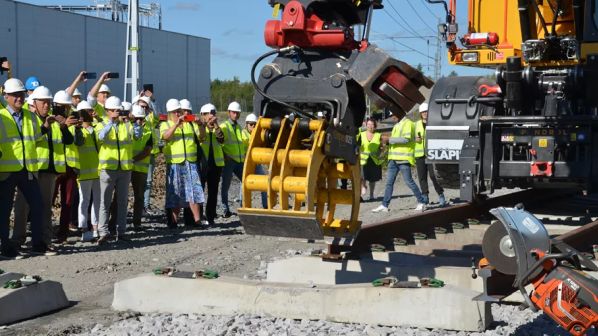 A ceremony was held in Umeå on August 26 to mark the start of track laying on the first section of Sweden's North Bothnia line.
Photo Credit: Trafikverket

Construction of the first 12km section of the new line between Umeå and Dåva started in 2018 and freight traffic is expected to begin on this section in 2024. Trafikverket says construction will start soon on several parts of the next section from Dåva north to Skellefteå, while at the same time the planning phase for the northern section of the line, between Skellefteå and Luleå, will begin.

The North Bothnia Line is an extension of the 250km/h Bothnia Line between Örnsköldsvik and Umeå which opened in 2010 and will serve the coastal region in the most populated part of northern Sweden.

When all phases of the line are complete, the mixed-traffic railway is expected to halve journey times between Umeå and Luleå which currently take four hours for the 351km trip via Boden. The line will also reduce the transit distance for freight traffic to and from northern Sweden and support increases in maximum train weight to 1600 tonnes, compared with 1000-1100 tonnes on the existing north-south inland main line.