THE first section of Australia’s 1700km $A 10bn ($US 7.3bn) Melbourne - Brisbane Inland Rail project has been completed with the opening of the Parkes - Narromine section in New South Wales (NSW) on September 15. The milestone was marked with the hammering in of a gold clip in Parkes, where the project was launched in December 2018. 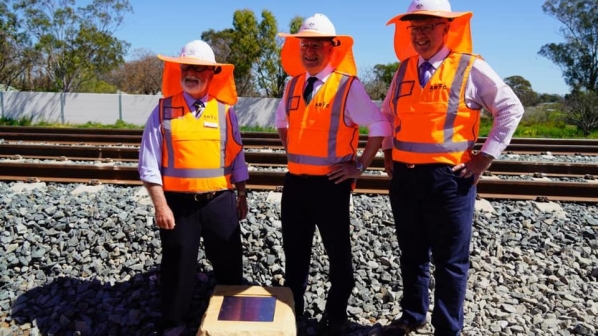 The ceremony was attended by MP for Riverina, Mr Michael McCormack, and MP for Parkes, Mr Mark Coulton.

Phase 1 of the project included upgrading 98km of track and constructing 5.3km of new line. The project required:

Australia’s finance minister, Mr Mathias Cormann, described Inland Rail as a once-in-a-generation project. “Long-haul rail is cheaper, safer and more reliable than road, that’s why the Australian government is enhancing the national freight rail network through our investment in Inland Rail,” he says. “The shift from road to rail builds resilience in our freight network. Not only will Inland Rail deliver a long-term freight solution for Australia to meet the needs of our growing population, it is also a critical investment supporting an efficient Australian economy.”

An in-depth update on the Inland Rail project will appear in the October issue of IRJ.