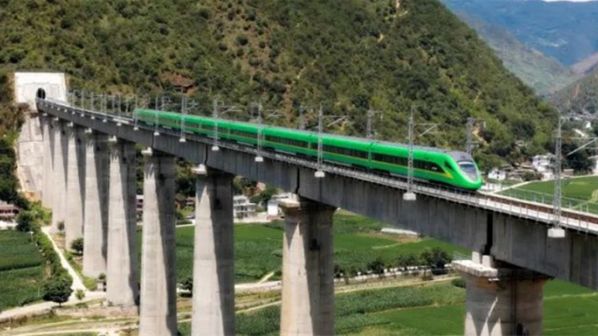 A China National Railway train crossing one of the impressive viaducts on the Dali - Baoshan line.

ON July 22, China opened the 133km Dali - Baoshan section of the planned 330km Dali - Ruili railway, marking an important stage in the construction of an international railway corridor between China and Myanmar as Ruili is close to the Myanmar border.

The line passes through the steep-sided canyons of the Hengduan Mountain Range, spans many rivers including the Yangbi, Yinjiang and Lancanq, and crosses areas of high geothermal heat and seismic activity. Construction started in 2008 and has involved overcoming numerous geological hazards such as landslides and mud and water surges, building the Lacanq River bridge in such a way as to overcome the impact of cross-winds in the valley, and the construction of the Dazhu Mountain and Xiuling Tunnels through challenging rock strata.

Careful inspections and adjustments of track, train control and safety systems were carried out before the first section of line was opened. China National Railway is operating seven pairs of passenger trains per day, three running from Kunming to Baoshan and four from Dali to Baoshan.

As well as having the potential to eventually form part of a Trans-Asian railway with a link between China and Myanmar, the new line passes through Bai, Dai and other ethnic minority areas and as well as opening up transport and communication possibilities for the people in the region, and - China hopes - promoting a sense of national unity, may also provide new opportunities for tourism.