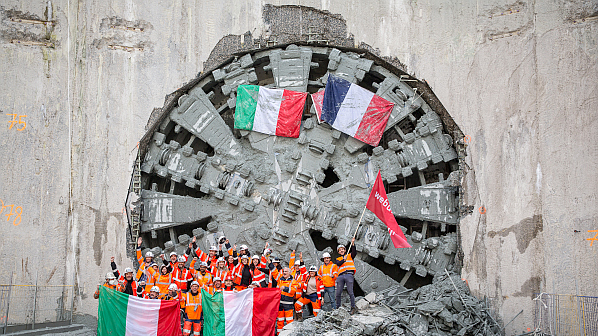 THE first tunnel boring machine (TBM) has broken through on the Paris metro Line 16 at the site of the future Clichy-Montfermeil station in northern Paris.

The TBM bored 2.2km from the Bel-air site in Chelles at the southern end of Lot 2, which is the section being constructed by Webuild and NGE. The breakthrough was attended by the mayors of Clichy-sous-Bois and Montfermeil and representatives of Société du Grand Paris (SGP).

The TBM will soon begin boring a further 3.1km to the Mare au Chanvre site at Sevran, where it will meet another TBM which has been working on the northern section of Lot 2.

The €5.3bn 29km Line 16 is part of the Grand Paris Express project and will connect Saint-Denis Pleyel to Noisy-Champs via Le Bourget RER station. The line will serve 16 municipalities with 10 stations.

As part of that project, Webuild and NGE are constructing 11km of tunnels and four stations between Aulnay-sous-Bois and Chelles.