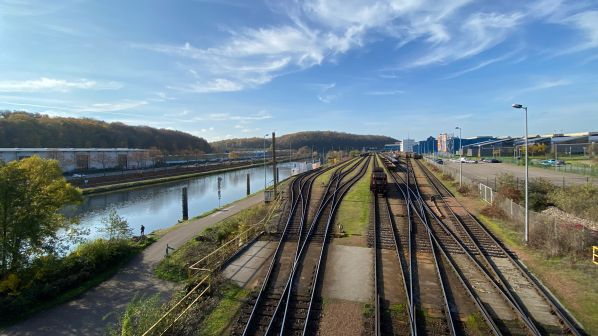 The upgrades will improve services from Saarbrücken to Basle.
Photo Credit: Michael Kretschmann

FRENCH infrastructure manager SNCF Network is progressing plans to increase the loading gauge in tunnels on the Réding - Saverne section of the Saarbrücken (Germany) - Basle (Switzerland) line which runs through France to provide a P400 loading gauge with a 4m corner height.

The move follows intense lobbying from freight operators using the parallel Rhine Valley Line in Germany, which carries 300 freight services a day, in the wake of several high-profile incidents including the Rastatt tunnel collapse in August 2017 which closed the corridor for two months.

DB Cargo, which has been pushing strongly for the upgrade, says enlarging three tunnels on the historic line in France would be a quick job at relatively low cost, and the creation of such a corridor would allow the diversion of freight trains between the Mannheim area and Basle in the event of problems in Germany.

At the same time, SNCF Network is installing ETCS over the route from Uckange to Basle, with the Luxembourg - Uckange and Mont-St-Martin - Longuyon sections already equipped. In the medium term, this will allow more freight services travelling from Belgium via Luxembourg and France to Switzerland to use the Zoufftgen/Mont-St-Martin - Metz - Réding - Mulhouse - Basle route.

The Rhine Valley Line in Germany was completely closed over three weekends from late July for track maintenance work, with only one track available over subsequent weekends and from August 30 to September 5.

Following experiments in November 2020, diversions from Kehl, near Strasbourg, to Basle over the SNCF Rhine Valley Line via Colmar and Mulhouse have now become common, particularly for trains carrying semi-trailers which have few alternate routes in Germany. Some services carrying containers have also been able to travel via the Black Forest route in August.