Hundreds of kilometres of track have been affected severely disrupting passenger and freight services. 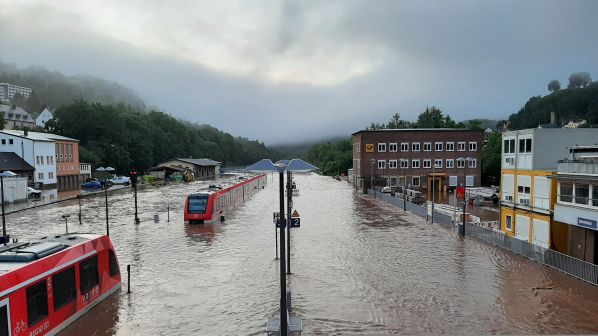 Trains at Gerolstein station in Germany were caught in the floods.
Photo Credit: Photos: DB

LINES across Germany and Belgium have been closed and traffic severely disrupted as record rainfall in western Europe caused rivers to burst their banks, devastating the region.

The German states of Rhineland-Palatinate and North Rhine-Westphalia and the Belgian provinces of Namur, Luxembourg, and Liège were worst hit. German Rail (DB) says it is still assessing the scale of the damage, which won’t be known until the flood waters subside, but at least 600km of track is affected in North Rhine-Westphalia alone.

At least 80 people have died in Germany, with at least 12 dead in Belgium, with hundreds still unaccounted for.

DB says the floods have severely damaged tracks, switches, signalling equipment, stations and signal boxes in many parts of North Rhine-Westphalia and Rhineland-Palatinate. All available employees and contractors have been working continuously since Wednesday evening to assess and repair the damage.

The Cologne - Düsseldorf - Essen - Dortmund line remains open, with severe restrictions including detours, delays and cancellations. However, ICE services have resumed between Berlin and Düsseldorf.

International long-distance traffic to and from Brussels is still disrupted, as numerous lines in Belgium are also closed, with services cancelled between Cologne Central Station and Brussels-Midi.

DB has set up a free hotline (08000 99 66 33) for passengers to receive information on current disruptions and line closures, with information also available at www.bahn.de/aktuell. Passengers can reschedule their travel for free up to a week after disruptions end, or receive a full refund.

In Belgium, the network is closed between Charleroi, Namur and Liege, and down to Arlon near the border with Luxembourg. Services on the cross-border Sittard - Maastricht - Liège-Guillemins line between the Netherlands and Belgium have been cancelled.

“Given the scale of the disruptions and in order to ensure the safety of our customers and colleagues, we have decided to suspend train traffic in a large part of Wallonië,” says Infrabel managing director, Mr Benoît Gilson. “Once the situation is under control, we will be able to assess the damage, prioritise and take the necessary actions to restart train traffic in complete safety.”