Three catenary islands will enable the use of battery-electric trains. 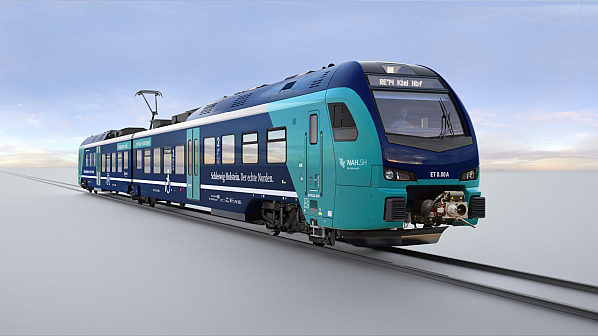 GERMAN Rail (DB) is to install partial electrification for the first time in 2023, enabling battery-electric trains to replace diesel sets on some routes.

DB says construction will begin this autumn. The first part of the project requires DB Networks to electrify additional tracks in Kiel, Bad Oldesloe and Büchen stations. The second step is extending the existing overhead lines on the Flensburg route towards Kiel between Kiel and Kiel Hassee. This will be completed next year.

In addition, with overhead set to be erected in three short sections known as catenary islands. These will be built in Heide, Husum and Tönning in Schleswig-Holstein and are expected to enter operation in December 2023. Charging substations will also be constructed at the same time in the same locations.

DB says that the catenary islands will range in length from a few hundred metres to a few kilometres. DB estimates that withdrawal of the diesel fleet will save 10 million litres of diesel fuel annually. Regional public transport authority NAH.SH ordered 26 two-car Stadler Flirt Akku battery-electric multiple units in 2019.

Dr Bernd Buchholz, Schleswig-Holstein minister of transport, called the schedule ambitious but was confident that the first battery trains would operate in December 2023.