Ground on the Kumasi - Obuasi line was broken in September last year. 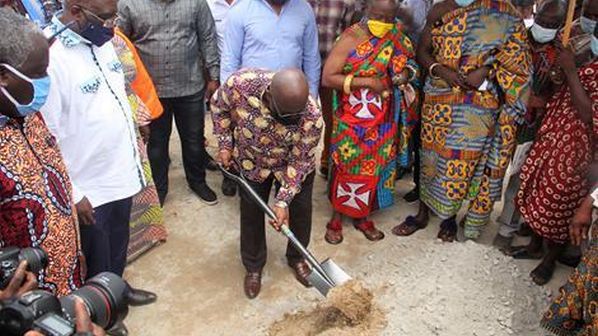 CONSTRUCTION of Ghana’s 83.5km Kumasi - Obuasi standard gauge railway (SGR) is due to begin eight months after ground was broken on the project, after authorities announced plans to forcefully evict land encroachers who have built illegal structures on the right of way.

The most affected area is the regional capital, Kumasi, where the 6km first phase of the project is being built between Adum and Kaase. The government, through the Ministry of Railway Development, has partnered with the Kumasi Metropolitan Assembly to demolish the illegal structures.

The government has also sought the blessings of the current traditional king of Ghana’s Ashanti people, Asantehene Otumfuo Osei Tutu II, who despite being a ceremonial leader wields enormous influence. The king has pledged his full support for the construction of the line and even cautioned that no compensation would be paid to anyone whose property is affected by the demolition.

Ghanaian minister for railway development, Mr John-Peter Amewu, announced during a visit to the Adum - Kaase section to ascertain the level of encroachment that the government intends to commence demolition of all structures to pave the way for the contractor, David Walter, to embark on the works.

The line from Adum, Kumasi, via Kaase and Eduadin to Obuasi is part of the SGR network initiated by Akufo-Addo at a cost of $US 2bn. The lines form part of Ghana’s six-stage railway master plan to revitalise the country’s existing 953km 1067mm-gauge network and expand it to more than 4000km over the next 25 years.

The first phase involves the rehabilitation of 668km of existing lines, with the subsequent five stages involving constructing SGR lines at a cost of $US 21.5bn. The country will also need to raise $US 22.7bn for freight and passenger rolling stock.

The Kumasi - Obuasi line is crucial considering it is in the western region that is rich in minerals including manganese and is emerging as a hotbed for oil and gas.