Trains will start running through the tunnel linking Germany and Denmark from 2029. 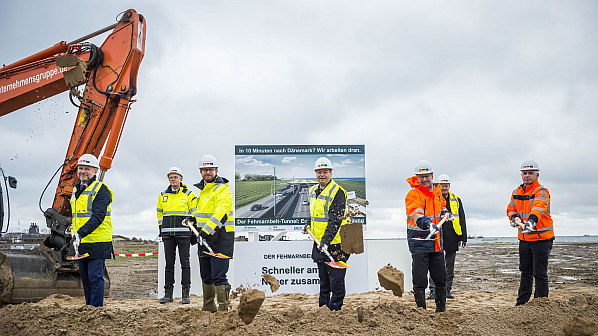 The ceremony in Germany on November 29.
Photo Credit: Femern/Olaf Malzahn

CONSTRUCTION of the 18km Fehmarn Belt road and rail tunnel between the islands of Lolland in Denmark and Fehmarn in Germany has begun at Puttgarden on the German side of the structure.

The Danish minister of transport Mr Benny Engelbrecht joined German parliamentary state secretary in the Federal Ministry of Transport and Digital Infrastructure Mr Enak Ferlemann, Schleswig-Holstein’s minister of transport Mr Bernd Buchholz and the CEO of Sund & Bælt Mr Mikkel Hemmingsen at the ground-breaking ceremony on November 29 to mark the start of construction.

Engelbrecht called the DKr 55.1bn ($US 8.6bn) Fehmarn Belt an “incredibly important construction project for both Denmark and Germany, indeed for the whole of Europe.”

Ferlemann said the tunnel was one of the largest and most significant transport infrastructure projects in Europe this decade. “Travel time by train from Hamburg to Copenhagen will be reduced to only 2h 30min, which is an important signal for the railway as a means of transport in the 21st century,” he said. The current journey time between Copenhagen and Hamburg is 4h 30min.

The tunnel will be constructed by digging a trench along the sea floor, before large prefabricated concrete sections are floated out and lowered into place. Cut and cover tunnels will be built at both ends to connect the tunnel to portals. Once open, the tunnel will have capacity for 70 freight and 38 passenger trains a day. Train journeys are expected to take seven minutes while car journeys will take 10 minutes.

Construction of the tunnel is expected to be completed in 2027 when it will then be fitted out with track and other lineside equipment. It will electrified at 25kV 50Hz ac to match electrification on the Danish network. This will run for 2km into Germany before reaching a changeover to the German 15kV 16.7Hz ac system.

The tunnel will be equipped with ETCS Level 2 and GSM-R, and trains will be controlled remotely from a control centre in Copenhagen.

The project is being funded through state-backed sovereign loans that will be repaid through tunnel access charges over 28 years.

An interview with Femern contract director Kirsten Margrethe Christensen appears in the September edition of IRJ. Digital subscribers can read it here.

For date on infrastructure projects across Europe, subscribe to IRJ Pro.