Heart of Wales line to reopen following floods and derailment

THE Shrewsbury - Swansea “Heart of Wales” line is due to partially reopen in November following repairs necessitated by storm damage and a freight train derailment. 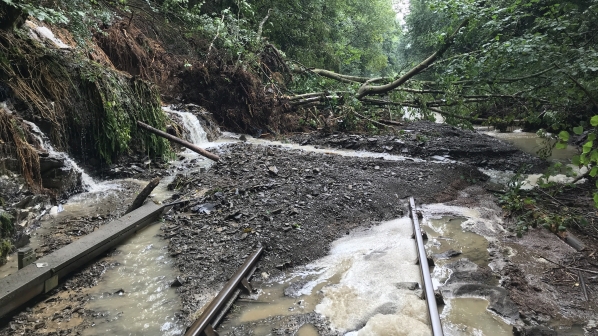 Extreme weather in August caused severe damage to the line near Llandrindod Wells, forcing the closure of the railway in central Wales. This was followed weeks later by a freight train fire and derailment at Llangennech.

Infrastructure manager Network Rail (NR) says it has been working around the clock to repair both sites, with the storm damaged part of the line expected to be open in November, while the section near Llangennech will reopen in the New Year.

Heavy rainfall and stormy weather led to multiple landslips and washouts near Llandrindod Wells with an estimated 3000 tonnes of cuttings, embankments and track being damaged while ballast was also washed away.

NR has already made significant progress repairing the storm damage with hundreds of metres of debris now cleared, while work is underway to reinstate the tracks and surrounding area. Engineers are working to stabilise the tracks and embankments as well as installing new culverts to improve water flow. CCTV is also being installed to enable improved monitoring of water levels in future.

Meanwhile, works at Llangennech are expected to continue through December ahead of a reopening in the New Year. The derailed wagons have been removed and NR is working with Natural Resource Wales and DB Cargo as it repairs track and deals with any contamination caused by diesel spilling from the train.

“A huge amount of progress has already been made as our engineers work tirelessly to repair the damage and open the Heart of Wales line as quickly as possible,” says NR’s Wales route director, Mr Bill Kelly. “They have had a mountain to climb in the last few weeks, but we now know the timescales for the reopening of the line, which we know is so vital to the local communities it serves.”

“It is great to see our colleagues in NR progressing with work on the Heart of Wales line and we will reinstate rail services once the work is completed,” says Transport for Wales rail operations director, Ms Alexia Course. “We are still facing challenges as a result of Covid-19 and will be able to release further timetable information closer to the time of work completion.”

The level crossing at Llandrindod Wells will also be improved this autumn with the bulk of the work being delivered between December 4 and 14. Both the line and the crossing will be closed during this period.