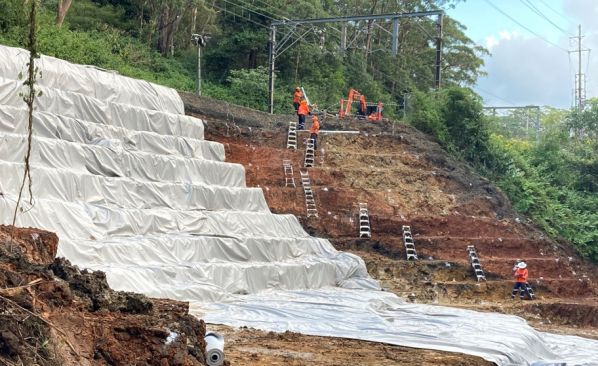 BAD weather in Australia has continued to create problems for both freight and passenger services, mainly in the state of New South Wales, where several weeks of heavy rainfall has resulted in major landslides and flooding.

The major regional centre of Wollongong, 85km south of Sydney, which hosts major port facilities and a steelworks, has effectively been isolated from both the inter-state and suburban rail networks since April 7.

Initially heavy rainfall at the beginning of March caused a major embankment failure on the cross-country Moss Vale - Unanderra line, owned by Australian Rail Track Corporation (ARTC). This had an immediate impact on grain and inter-state steel trains accessing Port Kembla port and the Bluescope steelworks in Wollongong. At the time, services were still able to be routed through the crowded Sydney suburban network to travel via Waterfall and Wollongong, as capacity allowed.

On April 7, further rainfall caused major landslides at several locations on the latter line ruling out the Sydney diversion option and effectively isolating Wollongong from the passenger and freight networks. Repairs to this line to provide limited capacity for freight services are expected be completed by April 25. However, ARTC has confirmed that the line from Moss Vale will remain closed for another six months due to the extensive nature of the works required.

Sydney was isolated from both the Western and Southern inter-state main lines for a week following heavy rainfall at the beginning of March. Landslides and washaways on routes through the Blue Mountains and the Southern Highlands restricted services heading to Perth in Western Australia.

The main line running south from Sydney was repaired within a week, but the line through the Blue Mountains remained closed for 18 days to freight services, and a further 13 days to suburban passenger services.