Israel unveils plans to extend A1 Link to central Jerusalem 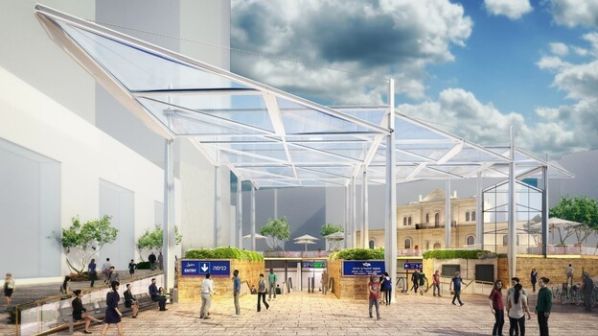 ISRAEL’s National Planning and Building Council has voted to start planning for an extension of the A1 Hertzliya - Jerusalem railway from its terminus at Navon deep into the city, serving two underground stations.

At this stage, it is planned bore a 1.6km tunnel for twin tracks through limestone rock from Navon to a new Central station at the intersection of Jaffa and King George streets. This would serve the Downtown area of Jerusalem and provide interchange with the Blue and Red light rail lines.

The tunnel would then continue to a second station at Chan, probably to be named Zion, which will provide interchange with the Old City cable car and handle traffic to and from the rebuilt Emek Gey-Hinom auditorium.

The extension is planned to distribute passengers more evenly across three stations in Jerusalem, as forecasts predict that Navon will reach its planned capacity with 13 trains/hour operating in each direction between Jerusalem and Tel-Aviv in 2040.

Preliminary renderings of the new Central station produced by Peleg Architects show a cube-like structure built of Jerusalem stone with a glass roof and walls and a large central plaza. The new station will have four entrances, with trees and greenery lining the glass walls.