ETIHAD Rail, the developer and operator of the UAE’s national railway, has awarded Hitachi Rail STS a Dirhams 1.6bn ($US 436m) systems and integration contract for stage two of the network. 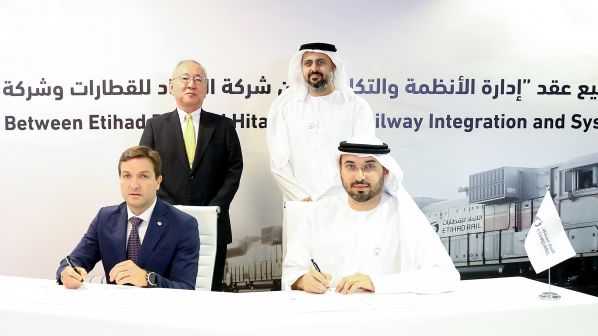 Etihad Rail has awarded Hitachi Rail STS the systems and integration contract for stage two of the network.

The contract was signed by Etihad Rail’s CEO, Mr Shadi Malak, and the CEO of Hitachi Rail STS, Mr Christian Andy while in the presence of Japan’s ambassador to the UAE, Mr Akihiko Nakajima, and Sheikh Theyab bin Mohamed bin Zayed Al Nahyan, member of the Abu Dhabi executive council and chairman of Etihad Rail.

The contract will see Hitachi Rail responsible for the design and installation of railway subsystems, in coordination with other stage two works and contracts, as well as managing operation tests.

The Hitachi Rail STS power system will be capable of handling 11kV of power and will be the longest distribution network in the country at 800km.

Etihad Rail’s locomotives will be equipped with ETCS Level 2, which will allow trains to move across GCC country borders without stopping.

The network will be fitted with communications systems and control centres with the main centre in Faya and another in Mirfa. The centres will be able to locate, control and stop trains if necessary.

The operations centre will also include a crisis management unit able to communicate with all concerned parties across the UAE.

“We are working with a strong will and determination to achieve a secure, modern and sustainable national railway network, and the awarding of the systems and integration contract is an important step in accomplishing this national strategic project, which is the future of a new transport sector in the country, and upgrades the transport and shipping sector in the UAE by linking ports to economic, industrial and residential areas,” Theyab says.