The construction method could be replicated on other viaducts along the 225km route. 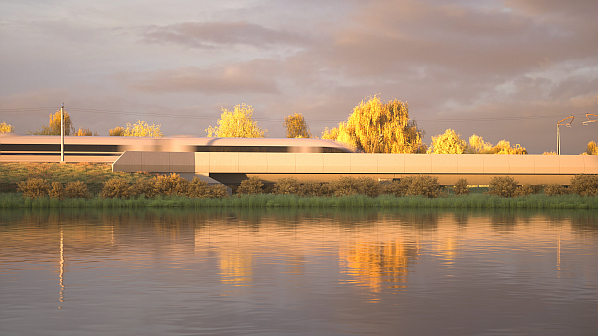 HS2 Ltd has revealed the final designs for the Thame Valley viaduct, which will carry Britain’s new high-speed line over a flood plain near Aylesbury, Buckinghamshire.

Applying lessons from recent high-speed rail projects in Spain, designers have reduced the amount of embedded carbon in the structure by adopting a simplified design that will enable construction of every major element off site, including the 35 concrete piers that will support the viaduct.

HS2 Ltd says that in a major step forward for viaduct design in Britain, the team has opted for two wide girder box beams per span instead of eight smaller beams. This is designed to simplify and speed up assembly.

Using this method to construct the 880m-long structure is expected to cut its carbon footprint by an estimated 66%. The design also means that fewer lorry journeys are required during construction and less waste is created. The Thame Valley viaduct is being constructed on the 225km Phase One London - Birmingham section of HS2, which is due to open between 2029 and 2033.

The viaduct will be set low into the landscape with a consistent profile. The underside of the viaduct will be 3m above ground with 36 25m-long near and even spans crossing the Thame river and surrounding wetlands. The piers will be extended to almost connect with the parapet edge, and HS2 Ltd says this is designed to enhance the appearance of a light and narrow structure.

Traditionally, viaduct beams are secured together above each of the piers with a concrete diaphragm which is cast in situ. The larger pre-cast beams that will be used at Thame Valley can be secured directly to one another, removing the need for the diaphragm. HS2 says this will improve durability and reliability, save time, cut costs and improve safety by reducing the need for people to work at height.

Thame Valley is one of 15 viaducts designed by HS2 Ltd’s main works contractor EFKB, a team made up of Eiffage, Kier, Ferrovial Construction and BAM Nuttall, working with their design partner ASC (a joint venture between Arcadis Setec and Cowi) and specialist architects Moxon.

Preparatory work is already underway at the site and the design team is investigating whether a similar approach can be applied to other, smaller viaducts on the route.