Eventually 10 TBMs will dig a combined 103km of tunnels on Britain’s HS2 Phase One. 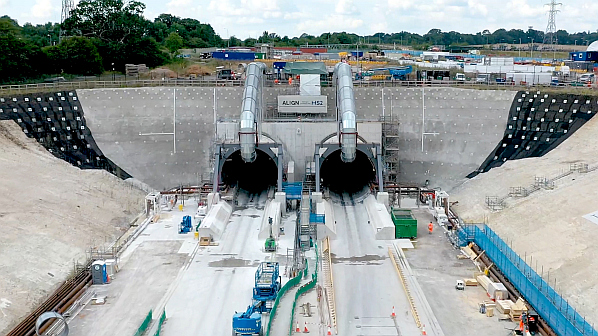 The tunnel openings at South Portal, with the TBMs inside.
Photo Credit: HS2 Ltd.

HS2 Ltd has confirmed that two tunnel boring machines (TBMs) have completed the first stage of their drive from the Chiltern tunnel’s south portal to the first ventilation shaft at Chalfont St Peter.

This is the first stage to be completed on Britain’s new high-speed railway, which is due to commence operation between 2029 and 2033.

The two TBMs have so far dug 5.7km under the Chilterns since they were launched last summer. The Chalfont St Peter ventilation shaft is 78m deep and is the first of five which will provide ventilation and emergency access to the 16km twin-bore tunnels, which are the longest on the 225km line.

The TBMs are operated by Align, which is a joint venture formed of Bouygues Travaux Publics, Sir Robert McAlpine and Volker Fitzpatrick. Each TBM is operate by a crew of 17 people.

The TBMs have also installed a combined 20,000 separate precision-engineered, fibre-reinforced concrete wall segments, each weighing around 8.5 tonnes. Each of the tunnels will require 56,000 of these in total. The segments are being manufactured in a factory at the south portal near the M25 highway.

In total there will be 10 TBMs operating on Phase One of HS2 between London and Birmingham, creating 103km of tunnels. Three have so far been launched.

For detailed data on British projects, subscribe to IRJ Pro.