The line has been under construction for 11 years. 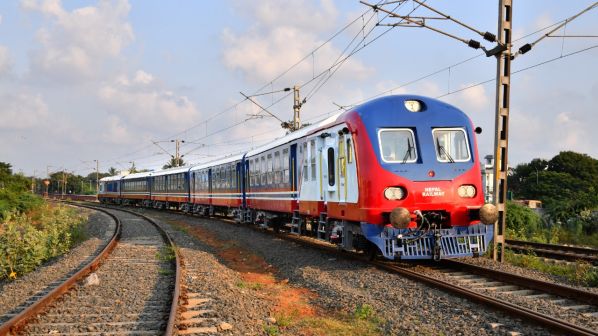 THE 35km line between Jayanagar, India, and Kurtha, Nepal, was inaugurated by Indian prime minister, Mr Narendra Modi, and his Nepalese counterpart, Mr Sher Bahadur Deuba, on April 2. Construction of the broad-gauge line, part of the 69.1km Jayanagar - Bijalpura - Bardiba line, began in 2010.

Two five-car DEMU passenger trains will initially run on the Jayanagar - Kurtha section, which will provide a connection for pilgrims travelling to Janakpur, known as the birthplace of Hindu goddess Sita. Testing has been successfully completed at 100km/h for passenger services and 65km/h for freight services. The cost of the project increased from Rs 5.4bn ($US 71.2m) to Rs 7.8bn.

Construction on the Jayanagar - Kurtha - Bijalpura line has been relatively simple as it follows the route of a metre-gauge line built in 1937, with the Jayanagar - Janakpur section operational until 2014.

“Bigger challenges are likely in building the third stretch from Bijalpura to Bardibas, which has hilly terrain,” an IR official says. “The Nepal Government has not even started the process of acquiring land for the rail line construction.”

When complete, the line will connect India’s Madhubani district in Bihar with the Dhanusa, Mahotara and Siraha districts in Nepal. The line will cross the Barhari and Rato rivers, with 15 large bridges and 127 smaller bridges proposed. The line will have eight stations, six halts and 47 level crossings.

IR’s renewed interest in building connections with Nepal appear to be driven by China’s push to extend the Lhasa - Shigatse line to Kathmandu and Lumbini under an ambitious $US 300m project. Earlier this month, the Chinese Embassy in Kathmandu reportedly indicated to Nepalese government officials that Beijing was prepared to find a feasibility study for the proposed China-Nepal Cross Border Railway connecting Keyrong in Tibet with Kathmandu, Nepal.

During Deuba’s recent visit to New Delhi, an agreement was also reached on accelerate the implementation of the second 18.6km rail link between India and Nepal connecting Jogbani, India, with Biratnagar, Nepal.

The project, included in India’s 2010-11 rail budget with an estimated cost of Rs 2.4bn, has missed several deadlines for completion, while costs have been rising. IR officials cite the Nepalese government’s failure to acquire land for the construction of Biratnagar station yard for the delay. “IR officials have resumed consultations to sort out such matters,” the officials say. “A detailed project report on extending the line to Kathmandu will also be taken up.”