ACCORDING to a report by China National Railway (CR) on April 2, the construction of the 142.3km 350km/h line linking Jakarta with Bandung in Indonesia is making progress despite floods and interruptions due to the coronavirus pandemic. 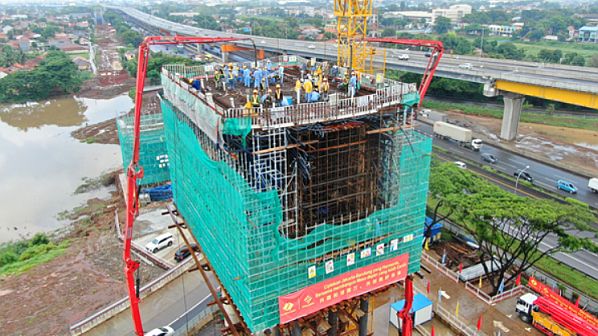 China National Railway says progress is being made on the Jakarta - Bandung high-speed project despite challanges.

Abnormal rainfall in the Jakarta area on January 1 caused flash floods followed by repeated heavy rainfall and flooding into February which delayed the project. According to Global Construction News, about 300 out of the 2000-strong Chinese workforce engaged on the project including senior managers travelled to China in February for the Lunar New Year but were unable to return due to travel restrictions to prevent the spread of the coronavirus. The supply of materials from China has also been interrupted, although this should resume as Chinese industry restarts after the Covid-19 lock-down.

Nevertheless, on March 12, CR says the Number 5 tunnel was completed on schedule. This is the second tunnel on the new line to be bored through. On March 27, concrete pouring for a section of the two main piers for the continuous rigid frame bridges on the high-speed line was completed and entered the segment construction stage.

There are 28 continuous beams on the line, of which 25 are under construction. The longest spans a highway interchange, and includes a cable-stayed bridge with a maximum pier height of 25m and 67 sections.

Most of the continuous beams are located on two bridges and are constructed by Chinese companies which have carried out research into the technique. More inspections are being made to ensure safety and quality.

CR says measures are being taken to protect employees working on the project from the coronavirus, and communications between all parties has been stepped up.

The $US 5.5bn project is being implemented by the Kereta Cepat Indonesia-China (KCIC) joint venture under a 50-year design-build-maintain-operate concession. Although Indonesia’s president, Mr Joko Widodo, attended a ground-breaking ceremony in the west Javan town of Walini on January 21 2016, the construction contract and funding was only agreed in 2017 along with the award of a contract to CRRC Qingdao Sifang for a fleet of 11 eight-car trains.

The line was originally due to open in 2019 but is not now expected to be completed until 2021 at the earliest. When the line opens, it will reduce the journey time between Jakarta and Bandung to between 36 and 44 minutes, compared with around three hours on the existing 173km 1067mm-gauge line. The line has four intermediate stations.

For detailed information on high-speed rail projects around the world, subscribe to IRJ Pro.