Dublin - Rosslare railway runs along cliffs and close to beaches and estuaries. 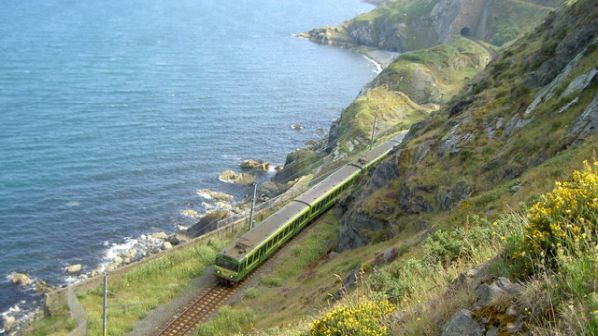 ECRIPP is required to defend long sections of the 168km 1600mm-gauge Dublin - Rosslare coastal railway line from coastal erosion and flooding for the next 100 years. The line runs from the capital via Wicklow and Wexford to Rosslare, the main southeastern terminal for ferries to Wales, France and Spain.

ECRIPP is being planned to defend the railway infrastructure and boost coastal resilience in the face of a changing climate with its associated rising sea levels, and Jacobs says it will be the largest coastal protection scheme in north western Europe.

IE’s East railway carries Dublin Area Rapid Transit (Dart) suburban EMU services as far as the coastal towns of Bray and Greystones and main line DMU services from Dublin Connolly to Rosslare Europort. 77km of the line runs adjacent to a coastal or estuarine environment making it vulnerable to the impact of climate change. The Killiney - Bray - Greystones section in particular includes dramatic cliffside ledges and a series of tunnels which have already required repairs due to erosion in the past, while the section between Greystones and Wicklow runs for some distance at a low level alongside a long shingle beach.

The frequency of track washout, where the sea has eroded the land supporting the railway, along with wave overtopping onto the tracks, has increased in the last 20 years, IE says. These incidents have had significant impacts on performance and safety, as well as major losses of land and habitats.

Options such as breakwaters, beach nourishment, onshore revetment strengthening, and other interventions will be subject to detailed design and modelling in the first phase of the programme. IE expects the projects to be completed as separate cells in stages within seven years.

“Our studies have identified that in the last 20 years there have been more storm events than there have been in the last 100 years, thereby increasing and accelerating the erosion rates and the climate change impacts,” says IE Infrastructure programme manager, Mr Aidan Bermingham. “Without this project we would just be fixing it all the time and that incurs problems such as getting access to land. There is a risk there would be pockets where the embankment would become unstable, and we would never let it get to that stage.”

“Our support will focus on environmentally-led design, with careful attention to the environmental sensitivities of the local area,” explains Jacobs vice-president buildings & infrastructure Ireland, Mr Dom Lynch. “Climate change is having a dramatic impact on the transport route and local area. Protecting the Dublin - Rosslare coastal line will build long-term resilience and preserve vital connectivity, local economies, and communities, while benefiting the next generation.”